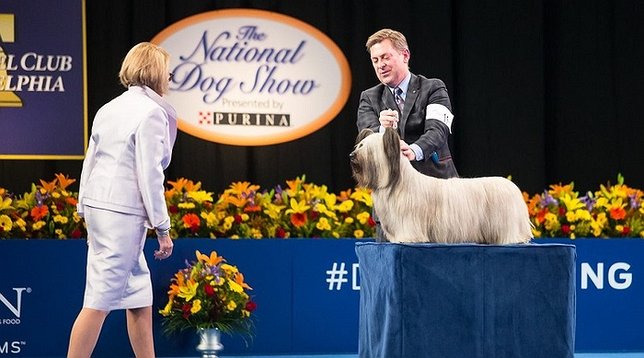 Photo by: The Kennel Club of Philadelphia's National Dog Show, via Facebook. 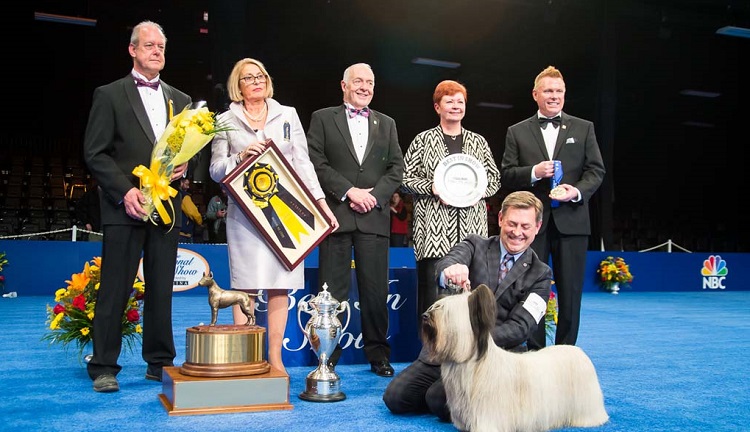 Included this year are three new AKC-sanctioned breeds — the Pumi (herding group), the Sloughi (hound group) and the American Hairless Terrier (terrier group) — bringing the total recognized breeds and varieties for the competition to 202. A total of 43 new breeds have been introduced to the competition since 2003.  Last year, Good Time Charlie, a 4½-year-old Skye Terrier who won over the crowd with his beautiful coat and happy personality, was named Best in Show from among the seven group winners.

An established family holiday tradition, the broadcast reached more than 20 million total viewers last year and is part of a five-hour block of family programming. The telecast will showcase more than 2,000 purebred canines competing for the title of Best in Show, with enormous prestige at stake. Unlike traditional dog show coverage, the Kennel Club of Philadelphia’s National Dog Show offers the country’s 65 million pet-owning households an afternoon of family-friendly activities, facilitated by the open format of the esteemed event. As one of the only remaining “benched” dog shows, all of the competing breeds are on display for the visiting public.

For more information on the “National Dog Show Presented by Purina®,” visit: http://www.nationaldogshow.com

Breed descriptions and more information can be found online.

John O’Hurley returns for his 15th consecutive year as host of “The National Dog Show Presented by Purina.”  Dubbed one of People magazine’s Sexiest Men Alive, O’Hurley is an award-winning actor, best known as J. Peterman from NBC’s “Seinfeld.” He won a Screen Actors Guild Award for Best Ensemble for his work on the classic sitcom.  More recently, O’Hurley played Dr. Christopher Neff on the Lifetime hit “Devious Maids.”

O’Hurley will again partner with co-host David Frei for the inaugural “Beverly Hills Dog Show presented by Purina,” airing Sunday, Apr. 16, 2017 on USA Network. Prominent former projects include hosting the Dick Clark Production of TV’s “Funniest Bloopers,” National Geographic’s “Show Me the Wild,” and syndicated game show “Family Feud.” O’Hurley has toured nationally with both the theatrical productions of “Spamalot” as King Arthur and in “Chicago” as Billy Flynn, and will take on the role of El Gallo in the long-running off-Broadway production of “The Fantasticks” this winter.

In 2005, O’Hurley was crowned the ultimate champion of ABC’s hit “Dancing with the Stars.” O’Hurley has added to his onscreen success with other ventures, including authoring three books—“Before The Dog Can Eat Your Homework First You Have To Do It: Life Lessons From A Wise Old Dog To A Young Boy” (Hudson Street Press, 2007), “It’s Okay To Miss The Bed On The First Jump” (Plume, 2007), and his latest book for children, “The Perfect Dog” (Grosset & Dunlap, October 31, 2013), which has been adapted into a musical stage show by Theatrical Rights Worldwide as part of its Theatre for Young Audiences catalogue. His film credits include “Employee of the Month,” “Race to Space,” “Billy the Kid,” “An American Carol,” and “Holidaze: The Christmas that Almost Didn’t Happen.”  He produced the biographical film “The Richard Petty Story,” starring Dennis Quaid, as well as a film version of the New York Times bestseller Ahab's Wife. O'Hurley resides in Beverly Hills with his wife, Lisa, and son, William Dylan.  Follow him on Twitter

New York Magazine once called David Frei "probably the most famous human in the world of canines.” Millions of television viewers know him as the longtime “Voice of the Westminster Kennel Club” and co-host of USA Network’s annual telecast for the past 27 years (since 1990), and as co-host on NBC of “The National Dog Show Presented By Purina” on Thanksgiving Day since its inception in 2002. He has made many appearances on “The Today Show,” “Good Morning America,” “The View,” “Fox & Friends,” “Martha Stewart” and more. David’s dog show adventures have taken him to the White House, to ring the opening bell at the New York Stock Exchange and for a ride on a float in the Macy’s Thanksgiving Day Parade.

He now works as a consultant for NBC Sports, continuing his on-air roles for both “The National Dog Show” and soon for “The Beverly Hills Dog Show Presented By Purina,” which debuts on Easter night 2017. A breeder-owner-handler and judge in the world of purebred dogs for more than 40 years, he has enjoyed competitive success with his Afghan Hounds, Brittanys and Cavalier King Charles Spaniel and has judged at dog shows all over the world.

David is most proud of the work that his dogs have been doing as therapy dogs at places like the Ronald McDonald House New York, Memorial Sloan Kettering Cancer Center and the VA Medical Center in New York. His second book, Angel On A Leash, about his world of therapy dogs and life in dogs, was the 2012 winner of the Dog Writers Association of America’s Award as best depiction of the human-animal bond.

With Westminster, David created a charity, Angel On A Leash (his book was named after the charity), in 2004, supporting a therapy dog program at New York-Presbyterian Morgan Stanley Children’s Hospital.  Angel On A Leash later became an independent charity with David as founder and president and expanded across the country.  David’s contributions to the world of dogs have been recognized with awards from Purina (2015 Better With Pets Award), the Dog Writers Association of America, the World Dog Press Association, and the Association of Purebred Dog Writers.

Petside.com named him as the Pet Person of the Year in 2011, and in 2015, Dog Fancy Magazine, in its final issue, included him in a retrospective, “45 People Who Changed the Dog World. David was also the co-author, with Mike Lingenfelter, of The Angel By My Side, in 2002. His third book, about his years at Westminster, is under way.  In 2004, he appeared in one of the final episodes of HBO’s “Sex And The City,” playing a smitten dog show judge awarding a big win to Charlotte and her Cavalier.

Previously, he held public relations positions with the Denver Broncos, San Francisco 49ers and ABC-TV Sports in New York.  A native of Oregon, he owned two popular sports bars in the Seattle area, as well as his own public relations agency, before moving to New York City in 2002. David and his wife, Cherilyn, with Angel (a Cavalier) and Grace (a Brittany), relocated back to the West Coast in 2016, where Cherilyn, a certified Catholic chaplain, now serves as Director of Mission Integration and Spiritual Care at Providence Hospital in Seaside, Oregon.