On October 26, 2015, Governor Andrew Cuomo signed Assemblyman Todd Kaminsky’s legislation granting certain benefits and honoraria to the Vietnam Veterans of America (VVA), which they have never before received. 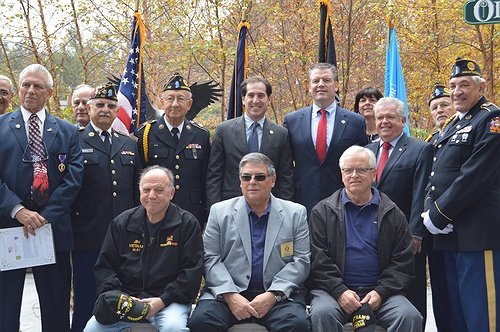 “I am honored to have to had the privilege of introducing and passing bipartisan legislation officially recognizing the Vietnam Veterans of America,” said Assemblyman Todd Kaminsky. “Those who gave so much to our country at the very least deserve to be recognized as the heroes they are. In advance of Veterans Day, let us all resolve to do whatever we can in the coming year to support our veterans. I would like to thank Senator Terrance Murphy for inviting me to today's ceremony and for his leadership on the issue.”

The legislation authored by Assemblyman Kaminsky declares VVA to be a benevolent order and grants it various benefits that are available to other veterans' organizations in New York State, such as the storage of records, flags, relics, and other memorabilia for prominent display within the hallowed halls of state capitol. Specifically, the legislation will:

Assemblyman Kaminsky said his legislation would ensure that VVA organizations are afforded the same benefits as other veterans' organizations in New York State so they can better support the next generation of America's war veterans and continue to serve our communities.