Kent Animal Shelter’s “Back in Black” promotion is in full swing, with three black beauties adopted already and an event added this month. 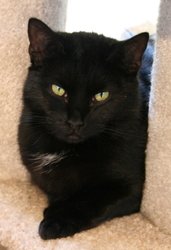 Calverton, NY - November 8th, 2013 - Kent Animal Shelter’s “Back in Black” promotion is in full swing, with three black beauties adopted already and an event added this month. The promotion is to highlight adorable, adoptable black dogs, cats, puppies and kittens that are too often overlooked. It is part of a promotion across the United States being supported by national animal welfare organization Best Friends Animal Society.

Two adult cats and one dog at Kent Animal Shelter have found forever homes so far this month thanks to the spotlight on them. BlackJack was taken to Kent Animal Shelter as a tiny kitten with a severe eye deformity, but his new adopter didn't mind his disability and loves him all the same. Madonna is a two-year-old cat, and although she’s a beauty, she’s not the kitten that people tend to prefer. Widget is a six-month-old puppy who traveled all the way from the Turks and Caicos where she was a stray who had to fend for herself... here in New York she found her forever family!

Adoption fees for black animals are 50 percent off during November as part of this promotion. On Saturday, November 16, 10AM-4PM, black pets will be adopted out to good homes for whatever donation is offered. To meet Kent’s ebony charmers visit www.KentAnimalShelter.com.

This adoption event is part of Best Friends Animal Society’s lofty, but reachable goal of No More Homeless Pets®, which aims to end the killing of dogs and cats in America’s shelters. Kent Animal Shelter is a participating member of the No More Homeless Pets® Network, a program of Best Friends Animal Society, offers help and support to animal rescue groups that save lives in their communities.

Kent Animal Shelter is a 501C3 organization established in 1968 in Calverton, NY that provides a no-kill haven for homeless animals, adoption services, a spay/neuter clinic, and humane education.