Dr. Zysman is the founder of Employee Assistance Resource Services, Inc. and author of a book entitled Successful Heroin and Opioid Addiction Treatment.

Long Island, NY - November 5, 2018 - Licensed clinical psychologist Dr. Simon A. Zysman, a pioneer in the field of addiction treatment, was honored this week by his Alma Mater, City University of New York at Queens College, for the recent successful publication and industry-wide impact of his book, Successful Heroin and Opioid Addiction Treatment.
Dr. Zysman is the founder of Employee Assistance Resource Services, Inc. (EARS), a Smithtown-based medically supervised outpatient substance abuse treatment program with one of the highest success rates in treating heroin and opioid addicts on an outpatient basis in New York State. Dr. Zysman developed a Medication Assisted Treatment (MAT) based program in conjunction with behavioral intervention (psychotherapy) which has proven to be very successful in treating Heroin & Opioid addicted patients, which inspired Dr. Zysman to chronicle his life-saving techniques by writing a book entitled Successful Heroin and Opioid Addiction Treatment.
Heroin & Opioid addiction induces depression that does not adequately respond to traditional psychiatric medication due to a condition known as “Dopamine Deficiency Disorder.” According to Dr. Zysman, the crux of opioid addiction is that it reduces the body's ability to generate dopamine, a vital neurotransmitter; the less dopamine your body generates, the more opioids you need to compensate for it. Buprenorphine treatment allows the body to fill the void associated with dopamine deficiency – in conjunction with conventional psychotherapy techniques – until the patients are able to function as relatively normal, healthy, individuals once again. Many families have thanked Dr. Zysman and the medical staff at EARS for giving them back their family members, restored to the way they were before they became addicted to drugs.
Since its release, Successful Heroin and Opioid Addiction Treatment has been doing exceptionally well in terms of both sales and the overall reception by the medical community. In order to support the release of the book, Dr. Zysman noted that he has been doing a series of personal appearances.
“I started doing presentations at libraries, universities, and I'm also hoping to be able to get some network television spots. I also spoke at a recent Alcoholics Anonymous meeting, as well as for a group of parents of addicted children…some of their stories were heartbreaking,” he said. “It's very important to get the word out, and the sooner we get the word out, hopefully the more lives we're going to save. That's really the most critical issue. We need to be more aggressive in terms of educating and promoting a treatment approach that has been saving the lives of Heroin and Opioid addicted individuals.”
Dr. Zysman has also been invited to attend book signing events at libraries, bookstores, guest speaking engagements about the current Heroin & Opioid epidemic, and other promotional events throughout Long Island in the New York metropolitan area. 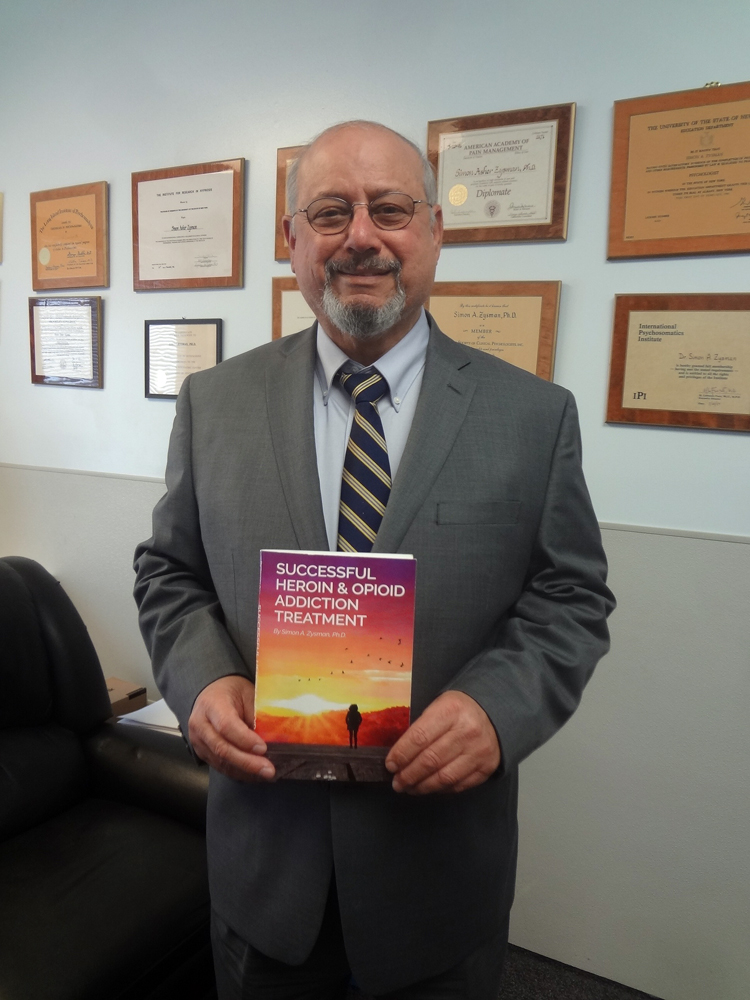 Dr. Simon A. Zysman holding a copy of his book, Successful Heroin and Opioid Addiction Treatment. Photo Credit: Chris Boyle
Due to the growing influence of Successful Heroin and Opioid Addiction Treatment, Dr. Zysman said that more physicians and medical facilities have been adopting his methods, including those who may have been initially resistant…until they saw the exceptional results, that is.
“We not only need to educate the general public, but we need to educate doctors, counselors, treatment facilities...we really need to spearhead this whole thing,” he said. “The book has already had a big impact on Long Island...many of the facilities that previously rejected the use of Buprenorphine are now utilizing it. However, many of them don't have that level of expertise yet that allows them to use it more effectively. It takes time for doctors to be able to use this treatment method, but when they do they can save more lives."
Dr. Zysman’s work has also attracted the attention of an independent film director who is currently working on a documentary about the opioid epidemic that is currently running rampant throughout the country.
“The director is interested in following my career and what led me to providing substance abuse treatment for opioid addiction,” he said. “The director is currently in the process of raising funds for the project ...because of the opioid epidemic, he feels that this film is desperately needed, especially when it comes to documenting my treatment procedures so that it can be more effectively duplicated.”
However, the most recent – and to Dr. Zysman, the most personal – accolade his book has received is in the form of a request from his alma mater, Queens College. After he informed the college of the publication of Successful Heroin and Opioid Addiction Treatment, officials from the institution requested a copy of the book for presentation in the Alumni Authors display in the campus’ Rosenthal Library. This distinction, naturally, is seen as a huge honor by Dr. Zysman.
“The Queens College alumni magazine has a section dedicated to books written by graduates, so I informed them of my book because part of my goal is to get the word out as quickly as possible,” he said. “After they learned about it, they wrote me a letter congratulating me on the book and requested that I send them an autographed copy to display at the campus Library. When I was a student at Queens College I used to work in the library, not knowing one day that my very own book would be on display there! I was very moved by the level of enthusiasm on the part of Queens College in regard to my book.”
The exposure that Dr. Zysman is receiving as of late, with speaking engagements and possible television appearances on the horizon, are all simply the means to a vitally-important end- to raise awareness of his book and the life-saving techniques contained within, and to deliver those techniques into the hands of the medical community and the general public at large. This way, he said, hopefully these techniques can be used in order to help curb - and hopefully significantly reduce the devastation that the national opioid epidemic is responsible for.
“Again, the main goal is to get the word out there in order to save lives, and to improve the quality of the lives of the people that we treat,” he said.
Successful Heroin and Opioid Addiction Treatment is available for sale on Dr. Zysman’s personal website (simonzysman.com), and via Amazon.com, in addition to other distribution channels.