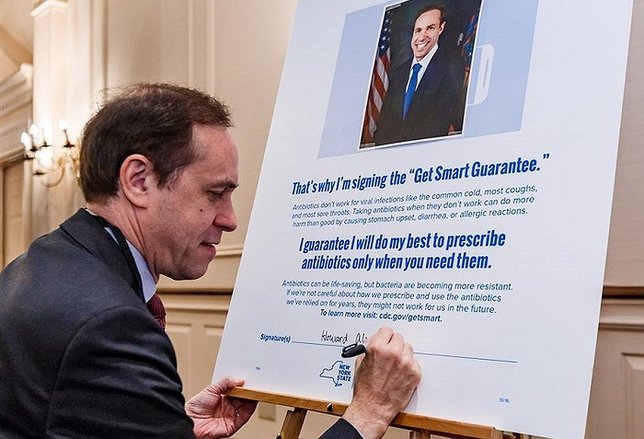 Commissioner of Health Dr. Howard Zucker: “Through this Summit, the Task Force is working with New York State’s health care leaders to shape a state-wide response to the growing public health threat of multi-drug resistant bacteria."

Albany, NY - November 4, 2016 - The New York State Department of Health (NYSDOH) convened the first-ever multidisciplinary New York State Antimicrobial Resistance Prevention and Control Task Force (NYS-ARTF) Summit this week. The summit addressed the need for prevention strategies throughout the health system and built on the work outlined at the July roundtable discussion on “Antimicrobial Resistance in Healthcare Facilities,” which was hosted by NYSDOH, Greater New York Hospital Association, and the Healthcare Association of New York State.

The engagement of stakeholders in the summit and roundtable is a key element in New York State’s comprehensive strategy to address the persistent and growing threat of multi-drug resistant bacteria. Cases of drug resistant Candida auris, a serious and sometimes fatal fungal infection and mcr-1, a novel drug resistant gene present in some bacteria, have been reported in New York.

The Centers for Disease Control and Prevention (CDC) estimate that each year in the United States, at least 2 million people become infected with bacteria that are resistant to antibiotics and at least 23,000 people die as a direct result of these infections.

“Through this Summit, the Task Force is working with New York State’s healthcare leaders to shape a state-wide response to the growing public health threat of multi-drug resistant bacteria,” said Commissioner of Health Dr. Howard Zucker. “If antimicrobial resistance is not addressed, we face a future where these medicines may no longer work, and infections will become difficult or impossible to treat. The most vulnerable among us will be the most at-risk.”

The summit involved experts from various disciplines including healthcare, agriculture, and veterinary care, as well as academia, community groups, and federal, state, and local government.

Last summer, the CDC designated NYSDOH’s Wadsworth Laboratory Center an Antimicrobial Resistance Regional Laboratory, one of seven in the nation. As such, Wadsworth will have specialized capabilities allowing rapid detection and identification of emerging antibiotic resistant threats.

Stakeholders participating in the summit were previously asked to outline New York State’s top priorities in the efforts to combat antibiotic resistance. Among the priorities listed were:

During the Summit, participants collaborated on designing practical solutions to achieve these priorities. The input from participants will be compiled to develop and implement a statewide strategic approach to combatting antimicrobial resistance as well as a report of recommendations that will be submitted to Governor Andrew M. Cuomo, by December 31, 2016.