Alexa Rinaudo of Bellmore and Kathleen Tuechler of Farmingdale, along with several other members of the Elms College women’s soccer team put together gift baskets for the kids being treated at a hospital. 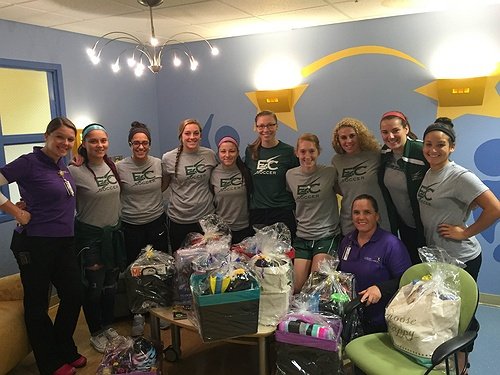 Long Island, NY - November 4, 2015 - Alexa Rinaudo of Bellmore and Kathleen Tuechler of Farmingdale, along with several other members of the Elms College women’s soccer team, recently found themselves talking about soccer with their new friend Autumn, whom they met during a community service trip to Baystate Medical Center in Springfield, MA. Elms College is a private, Catholic college in Chicopee, MA.

“As a team, we decided to reach out to Baystate and see what we could do to help,” said Elms College Head Women's Soccer Coach Sean Milbier. “We wanted to volunteer and help out in any way we could. They asked us to put together gift baskets for the kids.”

Milbier sent his players on a mission to gather toys and prizes to fill gift baskets, which in turn were presented to young patients being treated at Baystate. The Blazers assembled ten gift baskets filled with toys, stuffed animals, and treats along with ten gift cards. The team then made the trip to the hospital to present the baskets in person.

“We were able to actually meet with two patients during our trip,” added Milbier. “We met Autumn and a young man named Nolan, and it was a great experience for all of us. The hospital follows us on social media now, and sent us pictures of the kids opening their baskets in their beds with big smiles on their faces. This is something that we really wanted to do to help out, and it’s finally nice to see it all come together.”

The team plans to keep it going. “It was a really a good day, and we are going to continue to help out,” stated Milbier. “This wasn’t a one-time thing. We’ll keep going down to Baystate to meet with the kids, and we’d also like to bring some of them out to Elms to spend some time with us.”