Fans Can Net a Team MetroCard at Atlantic Av-Barclays Ctr, Six Other Stations. 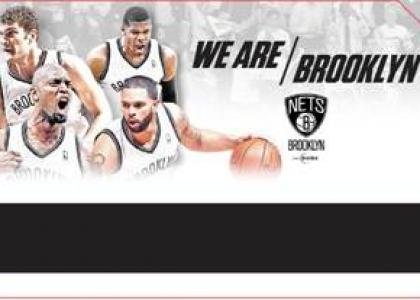 Brooklyn, NY - November 4th, 2014 - The Brooklyn Nets are getting a jump start to the 2014-2015 NBA basketball season with a new branded MetroCard. The team has become the first professional sports organization to purchase space on MetroCards as the Nets celebrate their home opener at Barclays Center tonight against the Oklahoma City Thunder.

“Our customers already take the train to the Nets’ home games. Extending that relationship through the use of a branded MetroCard is a slam dunk for the team, for MTA NYC Transit and for the fans who get an extra souvenir,” said Paul J. Fleuranges, MTA’s senior director of corporate and internal communications. “The Nets’ home, Barclays Center, sits above the Atlantic Av-Barclays Ctr station and has become a major entertainment and sports destination for NYC Transit and Long Island Rail Road, so we feel an especially strong connection to Brooklyn’s home team.”

“We always encourage our guests to take the subway or LIRR to our games at Barclays Center, which is located atop one of the largest transportation hubs in New York City,” said Brett Yormark, Brooklyn Nets and Barclays Center CEO. “We believe that connecting our brand with the MTA through MetroCards was a perfect way to reinforce our message of the convenience of getting to Barclays Center by mass transit.”

Nets fans can find the MetroCards at nine major subway stations beginning this week. Random distribution at MetroCard Vending Machines and station booths start at the Atlantic Av-Barclays Center B Q 2 3 4 5 and LIRR station complex, and the cards also will be available later that week at the following stations:

Prices for ads on both sides range from 25¢ to 45¢ per card, with minimum print runs of 250,000. The MTA produces 4 million to 5 million MetroCards every month.