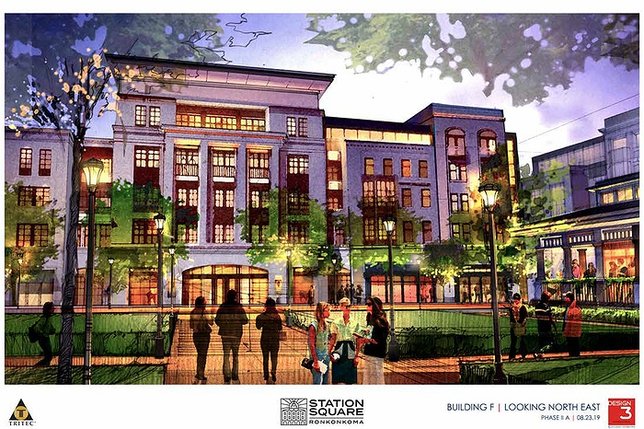 Rendering of the proposed Ronkonkoma Hub, a major mixed-use development in the Town of Brookhaven, Suffolk County.

Governor Kathy Hochul has announced the groundbreaking for Phase Two of the $700 million state-of-the-art Ronkonkoma Hub, a major mixed-use development in the Town of Brookhaven, Suffolk County. The $256 million second phase will create 388 housing units, 73,000 square feet of commercial space, 15,500 square feet of office space, and more than 1,200 parking spaces. Empire State Development is supporting this project with a $50 million capital grant as part of the Transformative Investment Program funding allocated to Long Island in 2017 New York State budget. ESD previously provided $5 million, recommended by the Long Island Regional Economic Development Council, to support a new sewage treatment plant and sewer infrastructure improvements.
"The Ronkonkoma Hub will be a major leap forward in building New York's economy and revitalizing the future of Long Island," Governor Hochul said. "This next phase of the Ronkonkoma Hub furthers our commitment to investing in transformative developments to bring residential and commercial spaces to Long Island. New York will continue making bold, strategic investments to support redevelopment and revitalization efforts across the State."
The Ronkonkoma Hub project, developed by TRITEC Real Estate, Inc., is transforming a once-blighted area into a new live-work-play destination located steps from the Long Island Rail Road station, and just minutes away from MacArthur Airport, Long Island's only major commercial airport. Phase one of this project created Alston Square, a nearly-500 unit apartment community that was completed in March 2020. Phase two is anticipated to be completed in late 2024.
Empire State Development Chief Operating Officer and Executive Deputy Commissioner Kevin Younis said, "The Ronkonkoma Hub builds on ESD's commitment to transformational economic opportunities by revitalizing a blighted area to create a vibrant and active community. This project will generate new residential and commercial spaces, supporting thousands of construction and permanent jobs within the community, while helping to catalyze regional economic growth."
The Ronkonkoma Hub will span approximately 53-acres, offering 1,450 residential multi-family homes, 360,000 square feet of office space, 195,000 square feet of retail space, 60,000 square feet of hospitality space, and three new parking facilities. The overall project will support 10,000 construction jobs and 2,500 permanent jobs. The project complements the 2018 modernization of the Ronkonkoma LIRR station, which received $5.9 million in upgrades to support rider experience including interactive digital signs and LED displays, benches with charge ports, and free customer Wi-Fi.
TRITEC Principal Jim Coughlan said, "Station Square at the Ronkonkoma Hub has been a community-driven effort and would not be possible without the cooperation of all levels of government. New York State's investment in infrastructure and parking has allowed TRITEC to invest more than $425 million in Ronkonkoma in the first two construction phases. We are looking forward to building Station Square and transforming Ronkonkoma into a true transit-oriented mixed-use destination that Long Island can be proud of."
Senator Alexis Weik said, "I look forward to Phase Two as it will bring business and housing to Ronkonkoma. Its proximity to the train station will hopefully encourage business growth for our town."
Assembly Member Doug Smith said, "Following more than a decade of community meetings, I am encouraged to see this beautiful modern development replace a blighted and derelict area in the heart of my district, surrounding Long Island's busiest transit hub. As we enter the second phase, this project has already created jobs and increased property values in our community and will continue to see hundreds of millions of dollars in private investment into Ronkonkoma. I will continue working with my partners in state and local government to make Long Island a more affordable and better place to live, work, raise a family, start a business, and retire."
Suffolk County Executive Steve Bellone said, "Transit-oriented developments, such as the Ronkonkoma Hub, are exactly what we need here in Suffolk County to help retain and attract young people and remain competitive as a region. This project continues to move full steam ahead, transforming a blighted area into a vibrant, pedestrian friendly hub that will serve as a 21st century model for the type of economic development projects that we need to continue to grow our economy in a sustainable way."
Brookhaven Supervisor Ed Romaine said, "Brookhaven Town has worked with the master developer of the Ronkonkoma hub to make this a transformative project by its proximity to the Long Island Railroad Ronkonkoma train station, MacArthur Airport and the Long Island Expressway. It's the ideal location for people to live especially if they commute to work by rail. It also serves as a great example of revitalization for other communities to follow. Once complete, it will vastly improve the quality of life for people who live and work in and around the area and generate substantial economic growth for the region."
Islip Supervisor Angie Carpenter said, "Phase Two of the Ronkonkoma Hub is another step forward in the transformation of this underutilized area into a vibrant, walkable and environmentally conscious destination to live, work and shop."