The girls were able to hold off Class B powerhouse Mt. Sinai who finished second in the meet. 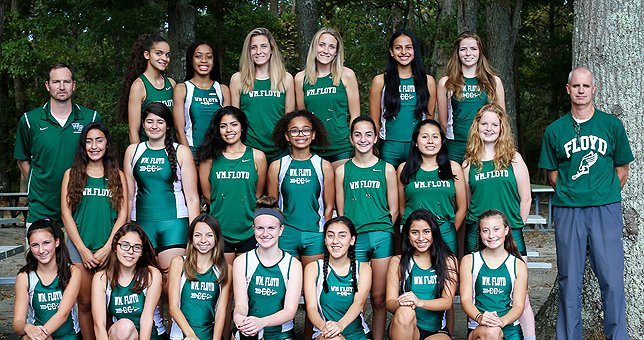 Mastic Beach, NY - November 3, 2017 - The William Floyd Colonials girls cross country under the leadership of head coach John Ryan, finished an impressive season in League I with a 4-2 record. The Colonials kept that competitive spirit alive as they placed first overall at the Westhampton Beach Invitational at Red Creek Park in Hampton Bays last month. In that competition, they were paced by eighth grader Hailey Carey who finished third overall with a time of 22:13. Senior Sandra Vivar Marin placed fifth overall coming in at 22:28. Jenni Cabrera, Courtney Connelly and Cassidy Connelly rounded out the scoring for the Colonials. The girls were able to hold off Class B powerhouse Mt. Sinai who finished second in the meet.
Additionally, the Colonials competed last week in the Division Championship Meet at Sunken Meadow Park, a race which saw Sandra Vivar Marin running what Coach Ryan called “the race of her life.” Sandra placed third overall in the Team Qualifier race with a time of 21:02.71, a personal best for her at the Sunken Meadow 5K course. She will now compete in the State Qualifier on Friday, November 3, for an opportunity to earn a spot at the New York State Cross Country Championships!