Hempstead Zoning Board Says No to Billy Deans

The Hempstead Zoning Board has denied Billy Dean’s application to open a “Las Vegas Style” club in Wantagh. 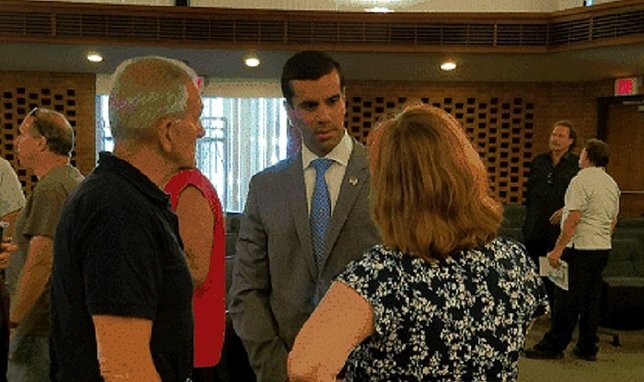 Pictured is Senator Venditto speaking with Wantagh residents earlier in the year before the Hempstead Zoning Board of Appeals Meeting.

“This is a victory for our community. I have been opposed to this establishment since 2009, when I was Counsel to the Town Board in Hempstead, and during my tenure as a Nassau County Legislator.  Many residents were vehemently opposed to bringing in a “Las Vegas Style” club into a residential neighborhood. This type of entertainment in Wantagh would have effectively destroyed the quality of life in this vibrant community,” said Senator Venditto.

“By working together we have stopped the increased traffic, noise, and such crimes as petty theft and loitering that would have become a reality for Wantagh. This is an example of community and all levels of government working together to take a stand to ensure that the
residents’ voices are heard,” said Assemblyman David McDonough.

“I am grateful to the Board of Zoning Appeals for its thoughtful consideration in reaching this decision.   As their Legislator and neighbor, it was my honor to stand beside the residents of this community in the long fight to preserve and protect the character of their neighborhood and the safe and peaceful environment we have all created together.  I must also thank my partners in government, Senator Michael Venditto, who has been in this fight from the beginning, and our great Assemblyman Dave McDonough for their leadership and support.  Most of all, I thank the community that collected thousands of signatures; submitted nearly 1,000 e-mails and sat through a nearly 14-hour hearing to offer their testimony in the effort to defeat this ill-advised proposal.  It's a wonderful testament to what a community can accomplish by working together for the common good,” said Legislator Steve Rhoads.

The Hempstead Zoning Board rejected the application at the November 2nd zoning board meeting to place a Billy Dean’s establishment at 3500 Sunrise Highway, on the corner of Sunrise Highway and Oakland Avenue in Wantagh. The property intended for this venue was close to the Wantagh Elementary School and children would have been passing this club to get to school or their bus stop.

There were concerns that this Billy Dean’s would also increase a host of social costs associated with the entertainment provided at this club.  Not only would there have been additional traffic and noise, but there were concerns regarding an increase in other crimes such as loitering and petty theft.