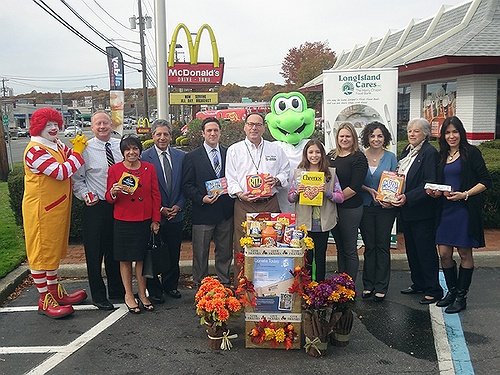 Representatives from Long Island McDonald’s, Long Island Cares, and the Girl Scouts of Nassau and Suffolk County kick off the holiday food drive.

Josh Kaufman, Owner/Operator of the East Northport McDonald’s on Jericho Turnpike that hosted the food drive kick-off event, noted that this is the organization’s sixth annual food drive, and that they are proud to partner this year – for the very first time – with Long Island Cares, one of the region’s most comprehensive hunger assistance organizations who has served thousands of individuals and families in need over the year.

“One of the core values of McDonald’s is partnering with and serving families within the community, and one of the ways we do that is by partnering with Long Island Cares,” Kaufman said. “We have beautifully decorated boxes in the lobby of each of our 82 restaurants throughout Long Island. And we’re just looking for people to bring canned and non perishable food items, and drop them in. Long Island Cares, along with the Girl scouts and other volunteers, will get the food to the Long Island Cares facilities, and then to those in our communities that are in need.”

Luciana Montuoro, Long Island McDonald’s Marketing and Public Relations Director, noted that Long Island Cares had reached out to her over the summer about a potential partnership, and she said that McDonald’s was only too happy to get involved with such a well-regarded charitable organization known far and wide for their efforts to help those less fortunate.

“We’re always about doing things in the community, and we’ve done food drives of our own in the past…we just thought this was another great way to reach out to the community,” she said. “From November 1 to December 23, our customers can being in cans and other non-perishable foods – as well as baby formula – to any of our 82 McDonald’s on Long Island to show support and help those that are in need.”

Paule Patcher, the CEO of Long Island Cares - The Harry Chapin Food Bank, noted that this new partnership with McDonald’s is an incredible opportunity to raise awareness of the plight of hunger throughout Nassau and Suffolk County.

“More than 316,000 people on Long Island, including 70,000, children, are impacted by hunger,” he said. “Together, McDonald’s and Long Island Cares are teaming up to fight hunger on Long Island, and working with the Girl Scouts as well…this is a win-win situation for people in need, and we’re just so proud of this collaboration.”

Christine Terzella, Director of Public Relations for the Girl Scouts of Suffolk County, pointed out that the donation boxes in many of the Long Island McDonald’s locations this season had been decorated by the Girl Scouts with festive reminders of thankfulness and the importance of giving.

Joyce Wagner of the Girl Scouts of Nassau County echoed the sentiments expressed by her Suffolk counterpart, saying that standing tall together this holiday season will help stamp out the scourge of hunger once and for all.

“We’re also proud to be partnering with Long Island McDonald’s and Long Island Cares,” she said. “Our girls do service projects to meet the needs of the less fortunate, and this is a great project for that, and we’re excited to be a part of this island-wide initiative.”

Paule Patcher said that it’s critically important for the Long Island corporate community – such as McDonald’s – to set an example for others and get involved in the fight against hunger.

“When corporations step up to the place and help to raise awareness, that simply educates and incentivizes other corporations to follow suit,” he said. “So, by McDonald’s taking the lead this holiday season and working with Long Island Cares, hopefully there are other corporations on Long Island that will see that this can be done and it’s as simple as putting a box in their business and asking people to donate.”