Department of Theatre students perform the most ambitious American play of our time written by Tony Kushner. 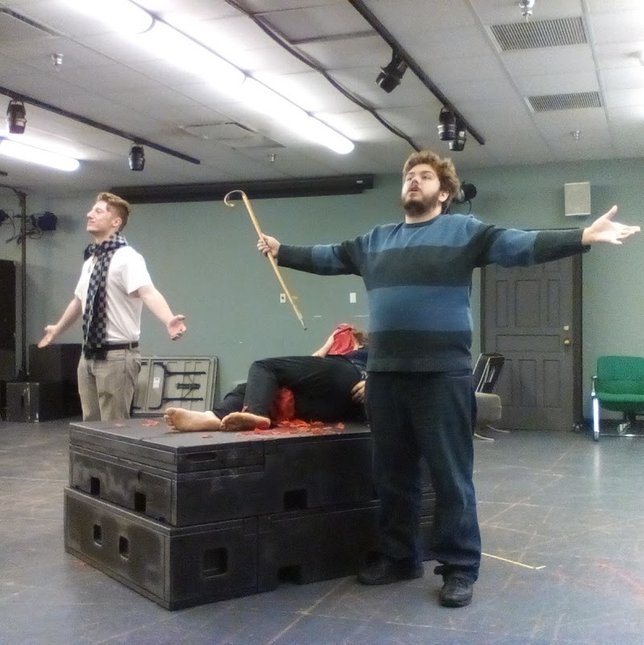 Garden City, NY - November 3, 2015 - As part of their season of Pulitzer Prize-winning plays, the Department of Theatre at Adelphi University’s Performing Arts Center (AUPAC) is pleased to present the powerful and engaging Pulitzer Prize-winning play Angels in America: Millennium Approaches, written by playwright Tony Kushner and directed by Adelphi Associate Professor Maggie Lally. This production features the students of the department of theatre and will run from Tuesday, November 10 to Sunday, November 15 in the Olmsted Theatre located at AUPAC, 1 South Avenue, Garden City, NY. The November 11 performance will be followed by a special post-show discussion moderated by Executive Director for the Center for Health Innovation,  Elizabeth Cohn, Ph.D., with a distinguished panel including former CEO of the Gay Men’s Health Crisis Marjorie J. Hill ’77, Ph.D. ’81. The production and discussion will use theatre as a bridge between the arts community and broader public to spark a conversation that looks at a public health issue.

Set in the New York City of 1985, this winner of the 1993 Pulitzer Prize for Drama and the 1993 Tony Award for Best Play is widely regarded as a modern masterpiece of the American theatre. This important work was perfectly captured by Jack Kroll in Newsweek when he said: “Daring and dazzling! The most ambitious American play of our time: an epic that ranges from earth to heaven; focuses on politics, sex and religion; transports us to Washington, the Kremlin, the South Bronx, Salt Lake City and Antarctica; deals with Jews, Mormons, WASPs, blacks; switches between realism and fantasy, from the tragedy of AIDS to the camp comedy of drag queens to the death or at least the absconding of God.”

Adelphi University Performing Arts Center (AUPAC) is one of Long Island’s premier cultural arts venues for entertainment of all kinds. Tickets are currently on sale and are priced at $20, with discounts available to seniors, students and alumni. For more information about all events at AUPAC and to purchase tickets, visit here. Information is available at The Lucia and Steven N. Fischer Box Office at (516) 877-4000 or email. Regular box office hours are Tuesday through Friday from 1-6 p.m. The box office is also open two hours before most scheduled performances.

About Adelphi University
New York’s Adelphi University is a nationally ranked, doctoral research university where students succeed by gaining the skills, knowledge and resources to thrive as professionals and active citizens in an interconnected and fast-paced global society. Today, nearly 8,000 students from 38 states and 46 countries pursue degrees in person and online through Adelphi’s eight distinguished schools and programs—the College of Arts and Sciences, the Gordon F. Derner Institute of Advanced Psychological Studies, the Honors College, the Robert B. Willumstad School of Business, the Ruth S. Ammon School of Education, University College, the College of Nursing and Public Health and the School of Social Work. Chartered in 1896, Adelphi is known for offering a personalized education—one is which students are mentored by talented and committed faculty members and readily find opportunities to initiate, innovate, explore and understand. With dynamic learning hubs on Long Island, in Manhattan and in the Hudson Valley, Adelphi serves communities, both regionally and globally, through the research and practice of its faculty, the collaborative initiatives undertaken by its centers and programs, the staging of distinguished cultural events and, most essentially, the education of future leaders and informed citizens.