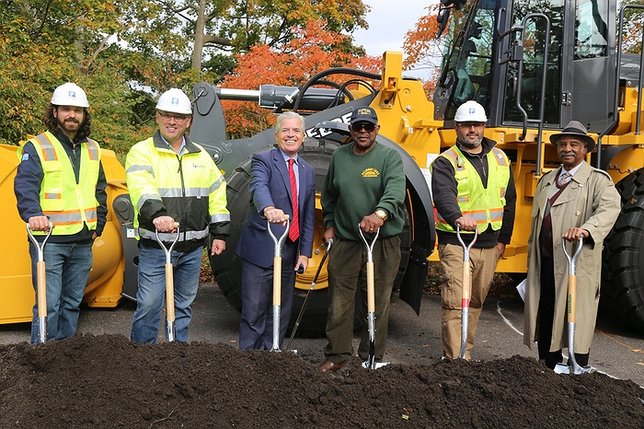 The Suffolk County Coastal Resiliency Initiative is part of a plan to make the region’s coastline more resistant to storm surge in the wake of Superstorm Sandy.

Suffolk County Executive Steve Bellone was joined by environmentalists, regional business and labor leaders, and elected officials for a ceremonial groundbreaking of an historic sewer expansion project that will connect nearly 6,000 parcels along the County’s south shore to sewers, creating hundreds of construction jobs and eliminating thousands of cesspools and septic systems that have been identified as a primary cause of the fouling of local bays. Known as the Suffolk County Coastal Resiliency Initiative (SCCRI), the project is being constructed with federal and state grant funds as part of a plan to make the region’s coastline more resistant to storm surge in the wake of Superstorm Sandy.
“On the ninth anniversary of Superstorm Sandy, we are taking a huge step forward in our efforts to make Long Island more resistant to climate change,” said County Executive Bellone. “Thanks to the strong support we have received from Senator Chuck Schumer and our partners in New York State government, we have reached an important milestone as we bring these historic projects to the point of construction. To simply call these projects a win-win does not adequately describe the magnitude of the benefits they will bring to our region. Injecting $400 million into the regional economy will help boost our economic recovery from the COVID pandemic. Not only that, but this project will eliminate nearly 6,000 of the cesspools and septic systems that scientists tell us are killing our bays and harbors. This a tremendous victory for our economy and our environment.”
The County Executive credited Senator Chuck Schumer for helping to secure and protect crucial federal funding for the project in the years since Superstorm Sandy devastated the region.
“It’s no secret that without Senator Schumer’s strong leadership in securing and protecting this funding, we would not be breaking ground today,” added the County Executive.
The SCCRI project includes the connection of 2,184 homes in the Carlls River Watershed in Babylon to an existing Suffolk County sewer district, and the connection 1,884 parcels in the Forge River Watershed in Brookhaven to a new treatment plant being built in Mastic. In addition, 1,489 homes that have located in Suffolk County Sewer District No. 3 since it was established in the 1980s, but had never been tied into the collection system, will be connected as part of the project. All of the construction is being completed at no cost to homeowners.
The primary sources of funding are $243 million from the Hazard Mitigation Grant Program (HMGP), administered by the Federal Emergency Management Agency (FEMA), and  $66 million from the Community Development Block Grant – Disaster Recovery (CDBG-DR) program administered by the US Department of Housing and Urban Development (HUD). The federal funds are being made available as part of the State’s Post-Sandy resiliency initiative through the Governor’s Office of Storm Recovery, and the New York State Division of Homeland Security and Emergency Services (DHSES).New York State has committed $30.7 million in state financial assistance, and Suffolk County will invest $42 million of its allotment in American Rescue Plan funding received from the federal government, and $24 million from a sewer stabilization reserve fund.
The ceremony broke ground for a 48-inch pipe that will be installed beneath the Southern State Parkway using a micro-tunneling technology to connect the community of Wyandanch to the north to the existing collection system that will carry wastewater from the new service area to the treatment plant at Bergen Point in the Town of Babylon. Installation of sewer collection system piping in roadways and the connection of individual homes will begin in November, officials said. Work on the Forge River project is expected to begin in late November.
“Today is an historic day, but we have much more work to do,” said the County Executive. “The Carlls River and Forge River projects will also make it possible for us to connect thousands of additional parcels to sewers. To build on the work we begin today, the County has requested more than a billion dollars in federal infrastructure funding to connect 12,000 homes in Deer Park, Wyandanch, Wheatley Heights and North Babylon. If this funding does become available, we will move quickly to begin design work for those connections, so that we do not have to stop construction when this project is completed, but can keep right on going.”