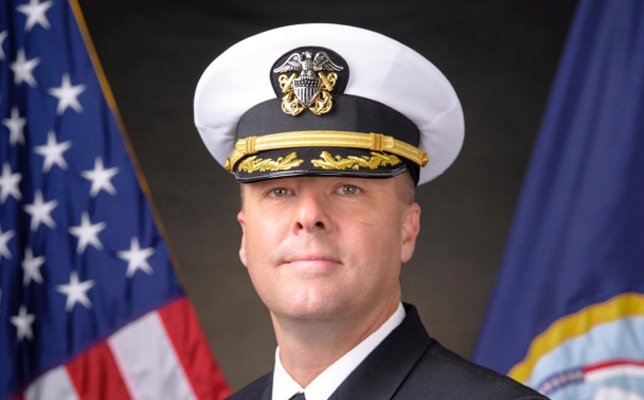 Long Island, NY - October 31, 2017 - Helicopter Sea Combat Weapons School Pacific (HSCWSP) held a change of command ceremony on Naval Air Station (NAS) North Island, November 2.
Cmdr. Joshua Fagan, of Bellflower, California, relieved Cmdr. Frank Ingargiola, of Huntington Station, New York, as commanding officer of HSCWSP. Capt. Ryan Carron, deputy commodore of Helicopter Sea Combat Wing Pacific, presided over the transfer of command.
Ingargiola led HSCWSP “Phoenixes” through multiple large-scale joint and multinational training exercises. HSCWSP has participated in multiple exercises over the past year, including Red Flag 17-2, Angel Thunder, Northern Strike, Phoenix Fire, and Dawn Blitz.  Under his tenure, HSCWSP launched the annual Phoenix Fire exercise - a combined arms, live-fire joint exercise designed to enhance the HSC community’s combat readiness through robust and realistic training incorporating air-to-surface and surface-to-surface close air support (CAS) with coalition joint terminal air controllers (JTACs). This last year, over 18 squadrons, 11 ground units, and one naval surface vessel expended more than 68,000 pounds of ordnance in 32 events.
Ingargiola started his military career in the United States Marine Corps in 1996, and transitioned to become a Naval Aviator in 2003. Since then, he has accumulated over 1,850 flight hours in the HH-60H, SH-60F and MH-60S.
Reflecting on his time in the command, Ingargiola said “I have loved my time here with the great men and women of the weapons school! This command is the cornerstone of knowledge and tactical excellence for the betterment of the community. I couldn’t ask for a better cadre of instructors and personnel! I’m so proud of all you have done and will continue to do!”
Upon detaching from HSCWSP, Ingargiola will report to amphibious assault ship USS Kearsarge (LHD 3) in Norfolk, Virginia.
Fagan graduated from the United States Air Force Academy in 1999 and began his career as an Air Force Acquisitions Officer.  In 2003, he transferred into the United States Navy and earned his Wings of Gold in 2004. Since then, he has completed multiple deployments in support of Operations Iraqi Freedom and New Dawn, humanitarian assistance and disaster relief missions in the Republic of the Philippines, and as a part of combined joint special operations task force, completing over 144 combat sorties and 2,175 flight hours in the HH-60H, SH-60F and MH-60S. He reported aboard HSCWSP as the executive officer in August 2016.
HSCWSP will continue to increase the warfighting capacities of Pacific Fleet HSC squadrons and ensure they deploy battle-ready in all tactical mission areas through implementation of standardized tactical curricula and exercises to improve overall combat effectiveness.