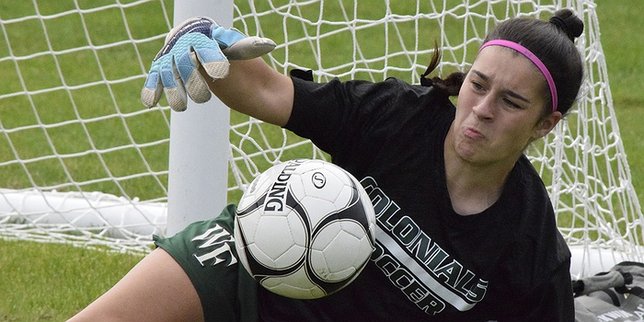 Mastic Beach, NY - October 29, 2018 - William Floyd High School senior Makayla Willets, a three-year starting goalkeeper for the William Floyd Colonials girls’ soccer team, recently finished an outstanding high school career which included 28-career shutouts, including seven this year which helped her earn Suffolk County Girls Soccer Coaches Association (SCGSCA) League AA “Goalkeeper of the Year” honors along with All-County accolades.
The Colonials, despite an overall record of 9-6-1 (8-5-1 in League play) and outscoring their opponents 46-13, just missed the playoffs. However, that doesn’t take away all that they were able to accomplish on the field under first-year head coach Kaleigh Sidaras, who was named the SCGSCA “Large School Coach of the Year,” and a stout defense led by Willets’ goalkeeping.
Willets recounts her time on the pitch as a Colonial fondly, “My soccer experience has been, without a doubt, a great one,” said Willets. “Although it has had its ups and downs, I wouldn't change a thing about it.” She recalls one game in particular that will remain etched in her memory. “Two years ago during my sophomore year, the varsity soccer team made it to playoffs for the first time in eight years. The day we clinched the playoffs, we faced Sachem North at home and won 3-0; not only did that win put us into the playoffs, but it proved to the rest of the league that William Floyd [girls’ soccer] arrived.”
Along with the fond memories representing the Colonials on the soccer field, she has learned valuable life lessons. The many coaches and players that have experienced those up-and-down moments with her have also helped shape who she is off it. “I have been blessed with the best coaching staff I could ask for – from the head coach to the assistant coaches,” said Willets. “Not only have they developed me into a soccer player, but they have helped develop me as a person. The soccer team we have is and always will be a family and the coaches always made sure they were there for us when we needed them.”
Coach Sidaras described Willets as an incredible person and athlete. “I will be sad to see her go but I know that she will continue to shine on and off the field, and in life.”
Willets’ journey both as a student and athlete does not end after William Floyd. She plans on attending Lees-McRae College in North Carolina, where she will be majoring in nursing and playing Division II soccer. She also plans to apply to Stony Brook University after she completes her undergraduate degree to pursue a master’s degree and hopes to become a physician’s assistant in Stony Brook’s pediatric oncology unit.
In a message to her coaches and teammates, Willets said, “Thank you for everything you have done for me as a player and a friend. You are a part of my soccer career forever and I will never forget the memories. I know you will all be supporting me on my next step in playing collegiate soccer. You have all taught me the definition of a team and I am glad I got the chance to be your player and teammate.”
All-State honors are still a possibility for Willets as they will not be announced until November.