With $734,930 in Social Service Block Grant for future disaster preparedness. 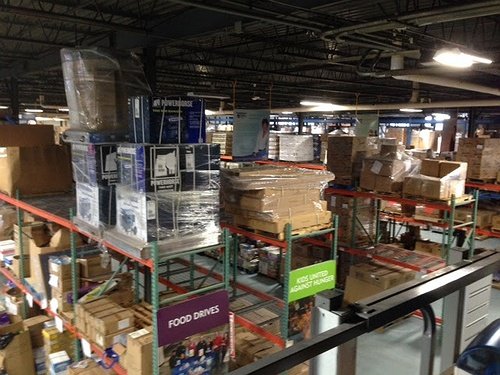 Hauppauge, NY - October 28, 2014 - As a result of receiving Social Services Block Grant funding of $734,930 from New York State, Long Island Cares, Inc. - The Harry Chapin Food Bank has begun the process of expanding their warehouse location in Hauppauge.  To assure that the regional food bank is prepared to meet any future disasters like Hurricane Sandy, Long Island Cares is increasing its freezer capacity by nearly 40% and will almost double the food bank's refrigeration capacity at their Hauppauge warehouse.  "This expansion will allow us to accept additional inventory of fresh produce, proteins, dairy products and other perishable foods that will be available for distribution in case of another region-wide crisis in which access to emergency food becomes significant," said Peter Braglia, Chief Operations Officer for the regional food bank.

According to Paule Pachter, CEO of Long Island Cares, Inc., "The regional food bank has a major supportive role in assisting local governments and emergency responders in times of crisis such as Hurricane Sandy. Two years ago, as Sandy struck Long Island we were besieged with food donations from New York State, Feeding America, partner food banks, corporate donors and from the general public.  Although we were able to accommodate all of the donations and additional purchases of food, we overloaded our freezers and refrigeration coolers and had to rent off-site freezer space to warehouse the huge inventory.  Now, as a result of this grant from New York State under Governor Cuomo's leadership, we will have additional capacity to warehouse more perishable food on site which will allow for swifter and more efficient distribution to our local communities at the most critical time."

In addition to expanding their inventory capacity, funding from this grant will also support Long Island Cares' South Shore Service Center in Lindenhurst which was opened in the aftermath of Hurricane Sandy, and provide limited support for their Nassau Service Center in Freeport.   Both locations provide community-based sites to distribute emergency food and supplies and coordinate emergency response and recovery services with other human service organizations and grassroots programs.  Both the Nassau and South Shore Service Centers are still assisting families recovering from Sandy nearly two years later.  "Freeport and Lindenhurst were in the middle of the storm and we were very fortunate to be located there so we could help families that needed our assistance both immediately and conveniently," said Jessica Rosati, Chief Proram Officer for Long Islan Cares.  "Now, with this additional support from New York State we will continue to operate in both of these communities for a long time and we will be better prepared to respond to the needs of our region when the next disaster occurs."