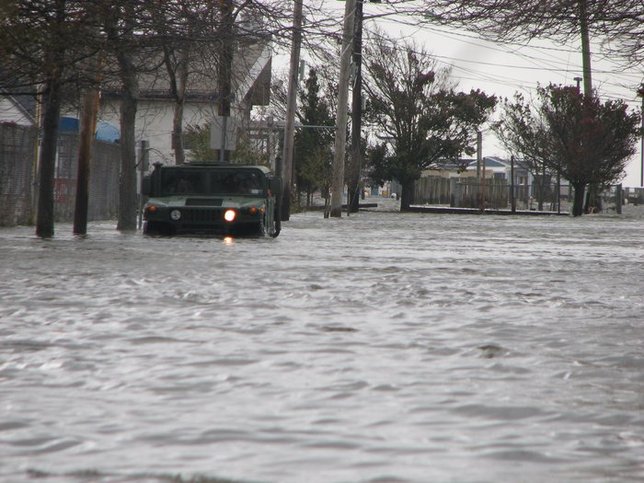 Long Beach, NY - October 26, 2013 - U.S. Senator Charles E. Schumer today announced that, after his push, the federal government will fully reimburse the city of Long Beach for the newly rebuilt boardwalk.  The final cost of the new boardwalk is approximately $42.7 million. Schumer has led the fight for a combination of reimbursements from the Federal Emergency Management Agency (FEMA) and flexible Community Development Block Grants (CDBG) that derive from the Sandy Aid bill he ushered through Congress. Schumer wrote to the Housing and Urban Development (HUD) Secretary Shaun Donovan urging him to be ready to approve flexible CDBG funds to reimburse the city of Long Beach for the boardwalk if the FEMA refuses to fully do so. Schumer today announced that the newer, more resilient Long Beach boardwalk will be fully paid for by the federal government via a combination of FEMA PA aid and CDBG funds administered by New York State. Earlier today at an event marking the Boardwalk’s reopening Governor Cuomo pledged to use the federal CBDG funds to complete funding picture. FEMA has agreed to pay at least $33 million of the cost for boardwalk and HUD CDBG will fund approximately $9 million if that number does not increase.

"The boardwalk is the cultural, recreational and economic heart of this city, and it’s now been rebuilt stronger than ever,” said Schumer.  “Now another generation of Long Islanders can enjoy this monument to the greatness of life on Long Island, where so many have had their first kiss, learned to ride their bikes, gotten married and watched countless sunsets.  I spoke time-and-again with FEMA Director Fugate to maximize their portion and urged HUD to be ready to approve CDBG funds to cover the remainder. This is exactly the kind of project we had in mind when we provided billions in flexible CDBG funding to help all New York get on its feet, and to build back better, smarter and stronger than before.”

After Superstorm Sandy destroyed Long Beach’s 2.2 mile boardwalk, it was ripped out and completely demolished in January.  Sustainable Long Island has teamed up with the city of Long Beach to create a number of forums and focus groups to help residents stay informed about recovery and revitalization efforts since Sandy. In a survey involving 2350 people on Long Beach, 87% of those surveyed listed “durability and resistance to future storms,” as the most important aspect in rebuilding the boardwalk.

Earlier this year, Schumer and the City of Long Beach unveiled a plan to rebuild the boardwalk stronger than it was before.  The new boardwalk is made of more durable materials, much like the boardwalk in Atlantic City which, although hit hard by Sandy, prevented the city from experiencing even more extensive damage.

Over the past year Schumer has had many conversations with many federal officials – including three with the head of FEMA, Craig Fugate – about the importance of fully reimbursing Long Beach for the boardwalk.

In a personal letter to Secretary Donovan, Schumer pushed to use CDBG funds to fill the unmet needs if FEMA refuses to cover the full cost of the boardwalk.

Schumer today announced that Secretary Donovan has approved his request and the boardwalk will be paid in full by the federal government.

A copy of Schumer’s original letter to Secretary Donovan is below:

As you know, SuperStorm Sandy inflicted a lethal blow to the South Shore of Long island, NY.  In particular, this storm destroyed dozens of homes, small businesses and the iconic 2.2 mile long boardwalk in the City of Long Beach.  This was a wrenching experience for a City of over 30,000 people that rely on the boardwalk as an economic engine and social fabric of the community.  The boardwalk has long been one of the many reasons why people from across the world come to live, work, and play in Long Beach, and it’s symbolic for thousands of Long Islanders who have had first dates, proposed marriage, learned to ride their bikes and grown up there.   Fortunately, through the diligent work of this community and its leaders, Long Beach will soon officially mark the completion of the reconstructed boardwalk, a stronger and more resilient version than its predecessor.  I write to urge your help enlisting the Community Development Block Grant-Disaster Relief program (CDBG-DR) as a supplemental funding source in the event that the Federal Emergency Management Agency (FEMA) cannot make this vibrant community whole for the cost of the new boardwalk.

For the past few months, I have been working with FEMA and the City of Long Beach to ensure that every dollar spent to rebuild and protect this boardwalk from future events is covered by the Disaster Relief Appropriations Act (P.L. 113-2).  The total cost of this project, including stronger wood and a wave wall, is approximately $42.7 million.  While negotiations between FEMA and the City of Long Beach are moving in an expedited and productive fashion, there is a possibility there could be unmet need for portions of the project that are considered eligible for reimbursement through public assistance or 406 mitigation funding from FEMA’s Disaster Relief Fund.

The Congress and the President fought hard to pass a disaster appropriations bill that included flexible CDBG funding that could contribute to long-term recovery and economic revitalization in the most impacted and distressed areas hit by SuperStorm Sandy, by acting as a “gap filler” where other disaster assistance falls short.  This directive is clear in the legislative language of P.L. 113-2, as well as the guidance issued by the Department of Housing and Urban Development (HUD) in connection with the first allocation of CDBG-DR funding. The Long Beach boardwalk is the perfect candidate for such an investment.  Therefore, I specifically request that in the event that FEMA makes an administrative decision not to consider the full $42.7 million cost of the new Long Beach boardwalk as eligible for reimbursement that the CDBG-DR program is allowed to cover the remaining costs.  Considering the economic impact the boardwalk provides to the community, HUD would be well-advised to consider this timely investment of CDBG-DR funds if faced with the opportunity.