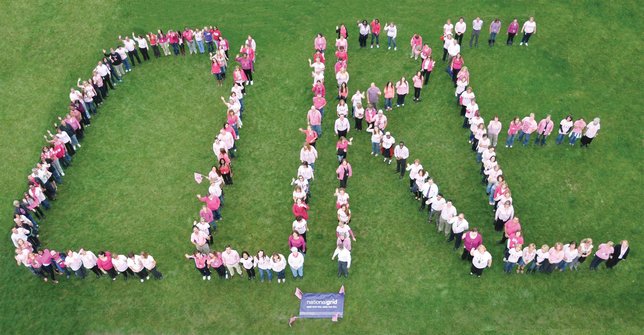 This statistic alone is one of the many reasons National Grid is supporting National Breast Cancer Awareness Month in October and its employees taking part in activities to raise awareness.

“Each one of us knows someone who has been afflicted with breast cancer, including many of our dedicated employees,” said Ken Daly, President of National Grid New York. “National Grid supports breast cancer awareness to educate our employees and customers on early warning signs and detection and to promote outreach to communities we serve across the region. It is through awareness that we can help to shine the light on a cure for breast cancer and provide hope for those who need it most".

In an effort to “shine the light,” National Grid’s Hicksville, Hewlett, Roslyn, and Brentwood buildings will be glowing pink this month to memorialize and celebrate those who have been affected by breast cancer.

“As a recent breast cancer survivor and an employee of NG, I am truly humbled by the support National Grid has demonstrated through its executives and its employees in creating awareness of this terrible disease as early detection is critical in saving lives, as it did mine,” said Michele Paoil, Senior Council, National Grid.

Buildings will be lit for the month of October. “When you stand before the Hicksville building let each light be a symbol of someone you know that fought and won, that battled and passed, or is currently struggling and know that they aren’t alone,” said Anne Line, Director of the Carol M. Baldwin Breast Cancer Research Fund, Inc. “Have faith and hope that each light stands beside another and that all of those lights resonate within us forever. The Carol M. Baldwin Fund would like to thank National Grid and all of those who came together to design such an amazing event. ‘Together We Will Find A Cure.’”

National Grid’s Women in Networks employee resource group (WiN) has organized a number of awareness activities for employees over the next several weeks.

The group is promoting the sale of pink flags and t-shirts the proceeds of which will go to local breast cancer awareness and care organizations.  A video conference was held by Dr. Patricia Numann, Center for Breast, Endocrine & Plastic Surgery, and Jacqueline Baldwin, Associate Director, Carol M. Baldwin Breast Cancer Research Fund of C.N.Y., to provide an opportunity for National Grid employees to learn more about breast cancer and its impact.

Breast cancer awareness events and activities during October are initiatives of National Grid’s Women in Networks Employee Resource Group. Other events to support awareness are also taking place in many of National Grid’s U.S. offices. On October 16 was Company-wide wear pink day.  In the Syracuse office employees wore pink and joined in a celebration to spell “C-U-R-E” in a word-formation display.

About National Grid
National Grid (LSE: NG; NYSE:NGG) is an electricity and gas company that connects consumers to energy sources through its networks. The company is at the heart of one of the greatest challenges facing our society - to create new, sustainable energy solutions for the future and developing an energy system that underpins economic prosperity in the 21st century. National Grid holds a vital position at the center of the energy system and it ‘joins everything up’.

National Grid delivers electricity to more than 3 million customers in Massachusetts, New York and Rhode Island. It manages the electricity network on Long Island under an agreement with the Long Island Power Authority (LIPA), and owns over 4,000 megawatts of contracted electricity generation, providing power to over one million LIPA customers. It is the largest distributor of natural gas in northeastern U.S., serving more than 3 million customers in New York, Massachusetts and Rhode Island.