Trooper Jean D’Haiti was injured while attempting to place a suspect under arrest on the Southern State Parkway in Long Island. 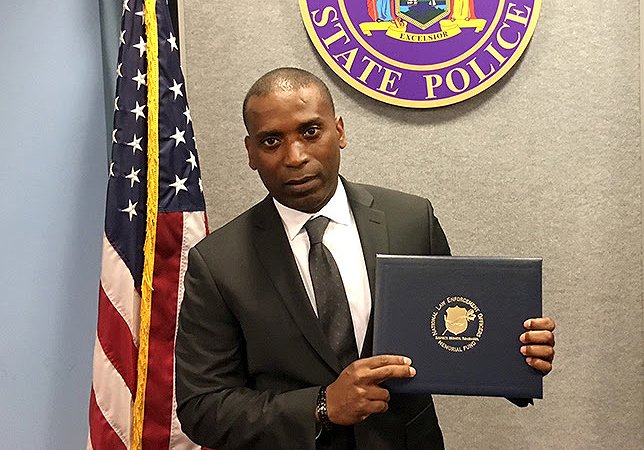 New York, NY - October 27, 2017 - The National Law Enforcement Officers Memorial Fund has selected Trooper Jean D’Haiti, of the New York State Police, as the recipient of its Officer of the Month Award for October 2017.
On February 15, 2017, Trooper D’Haiti pulled over a driver who had been texting on his cell phone on the Southern State Parkway in Long Island, New York. When it was determined that the vehicle’s registration and the man’s driving privileges had been suspended, Trooper D’Haiti told the driver that he would have to impound the vehicle. The driver became hostile, not allowing the trooper to take possession of the keys, telling him he wouldn’t allow the car to be towed away. Trooper D’Haiti opened the car door to grab the keys and a struggle ensued.
The driver was able to put the keys back into the ignition, start the car and began to drive away with Trooper D’Haiti still partially in the vehicle. Trooper D’Haiti hung onto the car door as the car traveled 300 feet, across all lanes of traffic, before being purposefully driven into the concrete barrier in the median. The trooper’s head struck the door frame in the crash, causing a severe laceration to his head.
Despite being badly injured and blood covering his face, Trooper D’Haiti grabbed the driver as he attempted to flee out of the passenger door and onto the parkway. The two struggled as they exited the vehicle. Trooper D’Haiti was able to gain control of the situation and pulled the driver back to the median and out of traffic. With the help of two motorists who stopped, the trooper was able to place the driver under arrest.
“After Trooper D’Haiti was severely injured due to the criminal actions of a motorist trying to escape, he kept his wits about him and kept fighting,” said New York State Police Lieutenant Robert Young. “He kept both himself and the man safe by dragging him off the road and then took him into custody. Trooper D’Haiti’s actions are in keeping with the finest traditions of the New York State Police.”
“Trooper D’Haiti showed amazing courage and determination in his stuggle to arrest this unlawful individual,” Memorial Fund President and CEO Craig W. Floyd said. “This situation could’ve ended far worse for both the trooper and the driver, and it is to the credit of Trooper D’Haiti that it didn’t. For this, we present him with the Memorial Fund’s Officer of the Month Award for October 2017.”
Located in the nation’s capital, the National Law Enforcement Officers Memorial Fund is a nonprofit organization dedicated to honoring the service and sacrifice of America’s law enforcement officers. The Memorial Fund’s Officer of the Month Award Program began in 1996 and recognizes federal, state, and local officers who distinguish themselves through exemplary law enforcement service and devotion to duty.
Trooper Jean D’Haiti, along with the other Officer of the Month Award recipients for 2017, will be honored at a special awards ceremony in Washington, DC, in 2018.
About the National Law Enforcement Officers Memorial Fund
Established in 1984, the National Law Enforcement Officers Memorial Fund is a private non-profit organization dedicated to telling the story of American law enforcement and making it safer for those who serve. The Memorial Fund maintains the National Law Enforcement Officers Memorial in Washington, DC, which contains the names of 21,183 officers who have died in the line of duty throughout U.S. history. The Memorial Fund is now building the National Law Enforcement Museum, which will tell the story of American law enforcement through high-tech, interactive exhibitions, historical artifacts and extensive educational programming. For more information, visit www.LawMemorial.org.