Legislator Rob Trotta and fellow Commack graduates Steven Cohn and Andrew Stein were inducted into the Commack Alumni of Distinction. 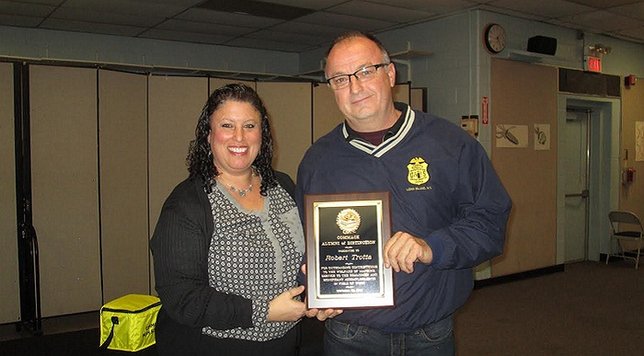 Commack, NY - October 26, 2016 - Legislator Rob Trotta and fellow Commack graduates Steven Cohn and Andrew Stein were inducted into the Commack Alumni of Distinction at a ceremony at the high school on October 22. Legislator Trotta is a 1979 graduate and pursued a career with the Suffolk County Police Department, retiring in December of 2013, as a detective. During his last 10 years with the department, he was assigned to the FBI’s Violent Crimes Task Force.

Currently serving his second term of office, Suffolk County Legislator Trotta represents the 13th legislative district, which includes Fort Salonga, Kings Park, San Remo, Nissequogue, Head of the Harbor, and St. James, as well as most of East Northport and parts of Smithtown, Northport and Commack. He has been vocal about his opposition to the Red Light Camera Program and sponsored legislation to suspend the program. Trotta has led the fight to end corruption in the County and worked hand in hand with the FBI to put public officials in Federal prison for their crimes.

Legislator Trotta thanked the committee for selecting him and congratulated the other two honorees. He noted that he is still involved with the Commack district as a guest speaker at various school events, attending the annual 9-11 memorial service and is a member of its Commack Coalition of Caring Committee.

Commack High School principal Leslie Boritz presented Legislator Trotta with a plaque that reads: “Commack Alumni of Distinction presented to Robert Trotta for outstanding contributions to the welfare of mankind, service to the community and significant accomplishments in field of work.”