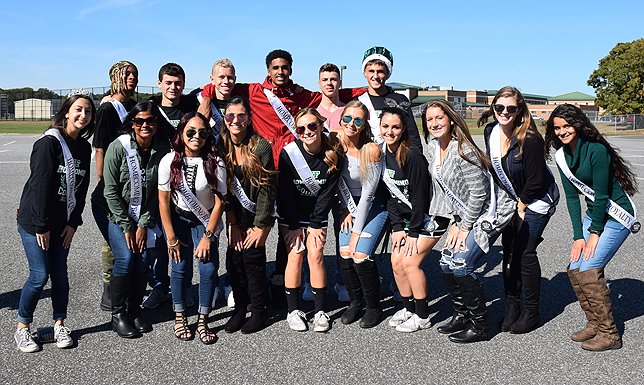 Mastic Beach, NY - October 25, 2017 - William Floyd held its annual homecoming celebrations on Friday, October 20 and Saturday, October 21, with festivities including the homecoming dance and crowning, homecoming parade and homecoming game on Saturday, in which participants and spectators showed off their William Floyd pride and spirit! The weather was perfect and the reigning Suffolk County Champion William Floyd Colonials did their part by defeating Sachem East 35-7 as they continue the march to defend their title and quest for a sixth Long Island Championship!
In the game, quarterback Robert Taiani led the Colonials with 10/12 passing for 265 yards and two touchdown passes – one each to Brandon Zack and Jordan Clinton. Nick Silva rushed six times for 95 yards and Mack Driver added two rushing touchdowns. Keith Winfrey also returned a fumble for a touchdown in the first half. At halftime, the varsity cheerleaders and Rockettes dazzled the crowd with their moves and the homecoming court was introduced including Homecoming King Evan Meinke and Homecoming Queen Sofia Galvez.