Bellone: "I encourage New Yorkers to take a day trip and visit some of our newest cider houses that add to our homegrown beverage industry." 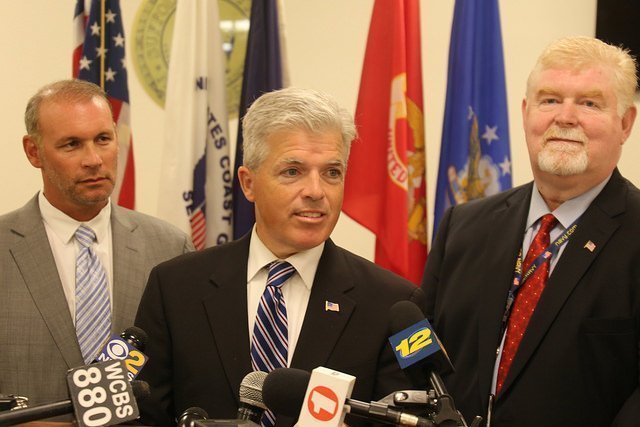 Suffolk County, NY - October 25, 2017 - Suffolk County Executive Steve Bellone today announced that Suffolk County will celebrate Cider Week in conjunction with the seventh annual Cider Week NYC. Cider Week, which is held this year from October 20-29, recognizes the agriculture industry in New York State and celebrates the recent success and recognition brewers have had in both national and international competitions.
“Agriculture is very much a part of our DNA in Suffolk County," said County Executive Bellone. “Thanks to Governor Cuomo’s efforts, our craft and cider industries have enjoyed unprecedented growth and success across the state. While Long Island is known for having some of the most renowned vineyards in the country, I encourage New Yorkers to take a day trip and visit some of our newest cider houses that add to our homegrown beverage industry.”
“Because of Governor Cuomo's leadership and the creation of the Farm Cidery law, we are experiencing a renaissance in craft cider production in New York State, and this week-long event is an excellent way to celebrate the industry's continued success,”said State Agriculture Commissioner Richard A. Ball. “It is exciting to see Suffolk County join Cider Week NYC, giving consumers an opportunity to sample some of the state's best hard ciders and giving producers a chance to connect to new markets.”
Suffolk County is home to two local cider producers in Riverhead, which include The Riverhead Ciderhouse, located at 2711 Sound Avenue in Calverton; and Woodside Orchards, located at 729 Main Road in Aquebogue.
The growth of the beverage industry has played a contributing role in supporting the county tourism industry.  In 2015, County Executive Bellone launched the #StaySuffolk campaign to promote Long Island’s $5.5 billion tourism industry.  The campaign includes an interactive social media presence as well as transportation services to bring visitors to beaches, campsites, and several downtown destinations to shop, dine and enjoy other amenities.
According to a study conducted by Tourism Economics through New York State Empire State Development, the tourism industry is responsible for approximately 77,000 jobs, including more than 40,000 jobs in Suffolk County each year.  In Suffolk County, tourism generates more than $365 million in local and state taxes.  With an estimated 3,000 acres of grapes planted and 1.2 million gallons of wine produced annually in Suffolk County, a majority of the 60 wine producers on Long Island offers tours and tastings that draw an estimated 1.3 million visitors annually.
In addition to holding successful industry Summits, Governor Cuomo launched the Taste NY initiative in 2013 to promote New York’s food and beverage industries. It is overseen by the Department of Agriculture and Markets and has created opportunities for local producers to showcase their goods at a variety of venues throughout the State and at large public events, such as the Great New York State Fair and PGA TOUR golf tournaments.
Over the last four years, the Taste NY initiative has seen steady growth and recognition. The program reported sales of $4.5 million in 2015 and nearly tripled those figures to more than $13.1 million in 2016. Today, New York products sold under Taste NY branding are available in more than 60 locations statewide as well as the New York State Office of Trade and Tourism in San Juan, Puerto Rico.
“The Farm Cider Program has done great things for New York and we love seeing friends and family gather at the Riverhead Cider House to taste the best New York has to offer,” said John King, Owner of Riverhead Ciderhouse. “We were recently rated as the best tasting room in Suffolk County and we thank our patrons and the County Executive Bellone for their incredible support.”
“Governor Cuomo’s support for the craft beverage industry has been tremendous for the East End, our ciders are second to none…so come out and enjoy,” said Bryan DeLuca, President of the East End Tourism Alliance.
Duncan Kennedy President North Fork Promotion Council said: “The North Fork is well known for its produce, including apples grown in sweeping orchards.  Not only can you come pick your own, we also have several farms that turn them in to crisp delicious soft and hard cider. Some are flavored with other fruits such as raspberry to create  soft sweet sensations. We are delighted to see Cider emerge and take their place amongst our other world class craft beverages.”
Steve Bate, Chairman, Discover Long Island and former Executive Director, Long Island Wine Council said: "The emergence of high quality cider on the East End is further evidence that Suffolk County is arguably the top region in the country for craft beverage production. There is simply no other area where cideries, wine makers, brewers and distillers have come together to make exceptional, hand-crafted products. " Steve Bate, Chairman, Discover Long Island (and former Executive Director, Long Island Wine Council).
“Suffolk County’s apple orchards and cideries continue to produce some of the highest quality products in New York,” said Rob Carpenter, Administrative Director, Long Island Farm Bureau. “Recent changes to New York State Law for the craft beverage industry have made it easier to produce and sell hard cider in Suffolk County.  This has led to exciting times in the agricultural industry as local producers have capitalized on these opportunities to expand their offerings.  We hope that Long Islanders will continue to support our local producers and buy “Grown on Long Island” agricultural products to keep our farmers growing.
For more information about Taste NY, please visit www.taste.ny.gov. Connect with Taste NY through Facebook, Twitter, Instagram and Pinterest.