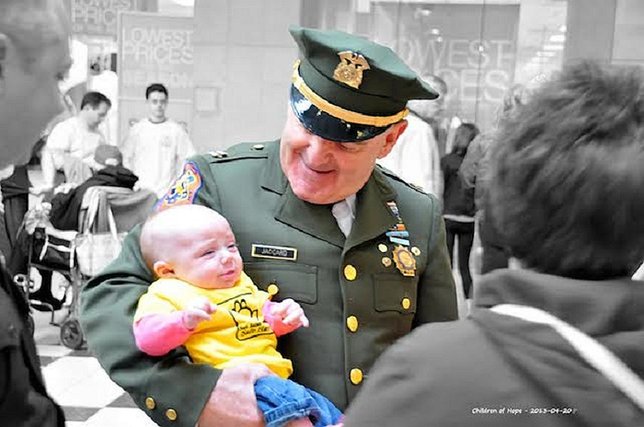 Wantagh, NY - October 25, 2016 - The Wantagh Chamber of Commerce will honor Nassau County Police Department medic Timothy Jaccard with its "Good Guy Award" for his tireless work saving infants and newborn babies with a dinner on Thursday, November 3, 2016 beginning at 6 pm at Oheka Castle, 135 West Gate Drive in Huntington.  The tribute is honoring Jaccard, founder and director of the AMT Children of Hope Foundation, a non-profit 501c3 corporation he established to prevent newborn abandonment.  Since 1998, he has been a driving force in Nassau County and across the U.S., helping to get laws passed to protect the precious lives of newborn children.

"Police paramedic Jaccard is a living example of what it means to protect and serve," said Nassau Police Benevolent Association President James Carver. "He brings credit each and every day to our department, our county and our country."

Affectionately called “Uncle Tim” by the mothers and children who have been saved by the Children of Hope program, Jaccard is a trained police medic with the Nassau County Police Department. He created the foundation to provide dignified burials for infants in Nassau who were abandoned and perished, often paying for it himself at the Cemetery of the Holy Rood in Westbury.

Emergency workers in nearby jurisdictions have asked him to bury the abandoned newborns found dead in their communities.  Jaccard reached out to local legislators and politicians to support a "Baby Bill," providing unwanted newborns a “safe haven.” The bill became law in 1999, giving mothers the options to leave their newborn at hospitals, firehouses and police stations without being prosecuted.

The Infant Abandonment Protection Act is adopted by all 50 states with medical staff who transfer the babies via ambulance to the hospital. There are approximately 5,900 ambulances in 31 states that participate in the Safe Haven program. Jaccard's work has expanded far beyond just burials with the goal of eliminating infant abandonment through counseling, prenatal care, hospital fees and adoption services for expectant mothers. Jaccard and his wife Aedan, a retired nurse, live in Wantagh where they raised three children and have five grandchildren.

“It is only fitting that he be honored for all of his work, not just nationwide, but in our local community,” said Wantagh Chamber of Commerce President Chris Brown. As a former volunteer Paramedic, I can’t think of a more deserving person to receive this award.”

Tickets are $200 and all money raised goes back into the Wantagh community in the form of student scholarships and funding for community activities.