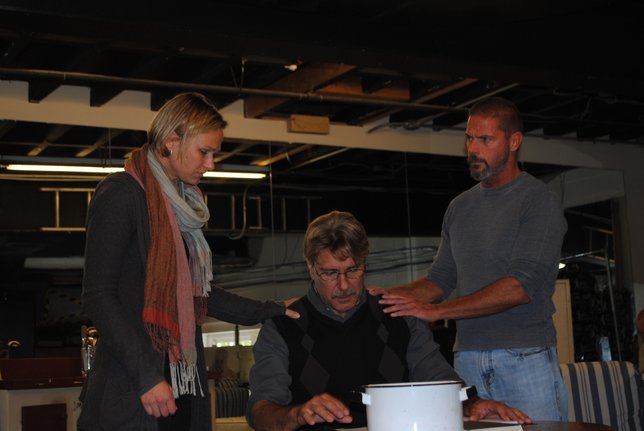 Sag Harbor, NY - October 25th, 2013 - Bay Street Theatre’s Literature Live! presents THE DIARY OF ANNE FRANK live on stage Friday, November 8 through Tuesday, November 26. The play is suggested for ages 13 and up.The program is sponsored in part by The Dana Foundation; Halstead Property; Suffolk County; The Sunny & Abe Rosenberg Foundation; and the Town of Southampton. Public performance pricing is set at $12 for students and $25 for adults.

The Diary of Anne Frank, written by Frances Goodrich and Albert Hackett, is presented as part of Bay Street Theatre’s Literature Live! educational program, which presents a  piece of literature selected from the core curriculum and brings it to life on stage for the general public as well as for schools across Long Island.

Literature Live! is a BOCES-approved Arts-in-Education program. Plays chosen are from standards-based literature and are supported with teacher-developed lesson plans and reference materials. All performances are 90 minutes and weekday shows are followed by a question and answer session with Werner Reich, a Holocaust survivor.

“We are looking forward to this year’sLiterature Live! performanceof Anne Frank,” says Executive Director Tracy Mitchell. “The Literature Live program reaches thousands of students as well as the general public and we are glad to bring this important story back to life this fall in a fully staged, theatrical production.”

The Diary of Anne Frank will directed byJoe Minutillo. Minutillo attended Hofstra University and Graduated with a BA in English and later, Theatre. While at Hofstra he worked closely with Dr. Richard F. Mason who became his mentor in directing. In his last year at the University, Minutillo choreographed the fight sequences in Ray Lawler’s play, “Summer Of The Seventeenth Doll” which won the American College Theatre Festival in Washington DC and for which he also received the “Award of Excellence” for fight choreography. After graduating, he continued his studies at Circle in the Square Theatre School and worked with Alan Langdon, Terese Hayden, Elizabeth Parrish, Jacqueline Brooks, and B.H. Barry.

Minutillo was one of the founding members of the New York State Theatre Education Association (NYSTEA) and has assisted with the NYS Assessment in Theatre and the development of the NYS teacher certification in Theatre. This past year received the NYS highest honor in Theatre Education, The “Rod Marriot Award”, for his contribution and work in Theatre Education. During his tenure as a Theatre Educator he has directed more than 130 productions in NYC, at the Gateway Playhouse, the Young Playwright’s program at Bay Street Theatre in Sag Harbor, and for the Young American Writers Project (YAWP) for Emma Walton and Will Chandler through Stony Brook University. Recently Minutillo performed in Joseph Sturek’s, “Michael In Room 2” at the Abingdon Theatre Complex, the June Havoc Theatre.

THE DIARY OF ANNE FRANK by Frances Goodrich and Albert Hackett is a stage adaptation of the book. The story, which made its debut in 1956, won both a Tony award for Best Play and the Pulitzer Prize for drama. This riveting play about the lives of eight people hiding from the Nazis in a concealed space above a warehouse, allows audiences to feel their claustrophobic existence, their hopes, their fears and their indomitable will to survive.

For those who are interested in supporting the program, donations can be made online at www.baystreet.org or by calling the Administrative office at 631-725-0818.

For group sales, show times and to purchase tickets, call the Box Office at 631-725-9500 or buy online at www.baystreet.org.

The Bay Street Theatre is a not-for-profit institution presenting new, classic and contemporary works with a commitment to challenging and entertaining our diverse community. This commitment extends to educational programs for all ages to foster the continued value of theatre as a vital art form for future generations.