Funds will be Used to Combat Violent Gangs Like MS-13, Human Trafficking and Enhance Record-Keeping Abilities. 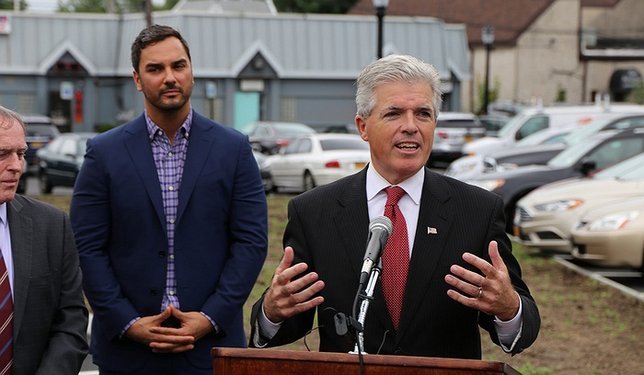 Suffolk County, NY - October 24, 2018 - Suffolk County Executive Steve Bellone and Suffolk Police Commissioner Geri Hart today announced that the Suffolk County Police Department has secured nearly $4 million in federal grant funding to enhance key departmental initiatives including the fight against gangs, and combating human trafficking.
“Commissioner Hart has done an outstanding job strengthening the department’s relationships with all law enforcement agencies in our region and has leveraged those relationships to bring in unprecedented levels of outside funding to further the department’s mission,” said Suffolk County Executive Bellone. “The men and women of the Suffolk County Police Department are among some of the best police officers in our nation and together we will continue to drive crime down here in Suffolk County.”
“Grants are crucial to all aspects of government entities to help supplement the support received from the tax base,” Suffolk County Police Commissioner Geraldine Hart said. “By securing these funds, the department is able to enhance our outreach to youth who may be prone to joining gangs, provide women victimized by human traffickers a second chance and expand the department’s record-keeping, which will provide law enforcement with additional information to increase information sharing throughout the county, which will lead to increased collaboration and more efficient intelligence-led policing.”
In Suffolk County, the fight against gangs is a top law enforcement priority. The first grant was awarded through the United States Department of Justice (DOJ) and provides $999,697 to enhance intervention and prevention efforts with at-risk youth in the communities of Brentwood and Bay Shore. Funds will be used with a particular focus on young people, between the ages of 14 and 24, to help change attitudes toward law enforcement and divert at-risk youth from criminal and gang activities.
In addition to combatting the gang problem, the opioid epidemic has had wide reaching effects on Long Island and remains a top priority of law enforcement. With the rise of opioid addiction, Suffolk Police have seen a disturbing rise in instances of human trafficking including prostitution. As a result, last year the SCPD launched a Human Trafficking Investigations Unit that has led to record levels of human trafficking and sex crimes arrests.
The second grant received from the DOJ totals more than $695,000 and supports the department’s human trafficking unit and their efforts to improve the way these cases and victims are handled. The department collaborates with the Empowerment Collaborative of Long Island (ECLI) to take women, forced to work as prostitutes and previously considered criminals by law enforcement, and treat them as victims. These women are given the opportunity to avoid criminal charges if they complete drug abuse treatment, mental health evaluations and care, as well as job training.
While the financial support to the fight against gangs and human traffickers is of the utmost importance, these objectives cannot be reached without proper information sharing. The largest grant secured during the past two months totals more than $2 million to support the department’s compliance with the DOJ’s mandate to upgrade all systems in which law enforcement records are kept. The theory behind the DOJ’s move to the new system is to maintain a more detailed look at crime statistics, including motives. The new records management system will be configured as a centralized system with the capability of adding all 18 law enforcement agencies who operate in Suffolk County as users. This will allow police departments to share information in real-time on both criminal and non-criminal incidents including details on arrests, motor vehicle crashes, warrants, property and impound. The DOJ announced the change in 2016 and is giving departments until 2021 to comply.
To date in 2018, the Suffolk County Police Department has received $10.3 million in grants with the anticipation of receiving as much as $12 million by the end of the year.