Long Island Music Hall of Fame Inductee, EPMD, and writer H. Bruce Franklin will be Tom Needham’s guests this Thursday on ‘The Sounds of Film.’ 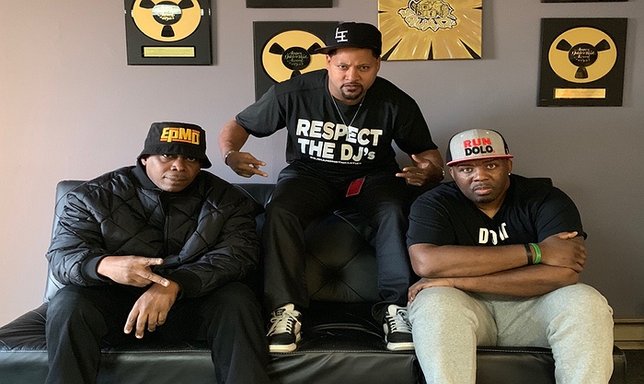 Photo by: Courtesy of EPMD

Stony Brook, NY - October 24, 2018 - Legendary hip hop group, EPMD, and acclaimed historian H. Bruce Franklin are Tom Needham’s special guests this Thursday at 6 pm on WUSB’s ‘The Sounds of Film.’
Brentwood’s EPMD is one of hip hop’s the most influential groups. The legendary duo of Erick Sermon and Parrish Smith, known together as Erick and Parrish Making Dollars, established themselves as the kings of the “hardcore” hip-hop scene with their funk-based grooves. Through the years, EPMD has produced a long list of gold-selling albums which always feature the word “Business” in the title.  Some of their most well known records include “Strictly Business,” “Unfinished Business,” and “Business Never Personal.” Over time, the increasing acceptance of their hardcore sound eventually gave way to their 1993 Number One hit “Crossover.” In addition, their imaginative lyrics and funky grooves made their music in demand on MTV, and in movies like ‘Juice,’ ‘Barbershop,’ and ‘Whip It.’
EPMD is being inducted into the Long Island Music Hall of Fame on November 8th at the Space in Westbury.  Their award is going to be presented by fellow Long Island hip hop legend, Chuck D. of Public Enemy and DJ Chuck Chillout. Some of the other confirmed artists attending the event include Billy Joel, Jimmy Webb, Elliott Murphy, Melanie and Taking Back Sunday.  EPMD joins an impressive list of hip hop stars already inducted into the Long Island Music Hall of Fame including Eric B. & Rakim, LL Cool J., RUN-DMC, Kurtis Blow, Big Daddy Kane, Salt-N-Pepa, Public Enemy and Whodini. For more information about the Long Island Music Hall of Fame’s Induction Gala, go to limusichalloffame.org.
Also on ‘The Sounds of Film’ is cultural historian H. Bruce Franklin, who will be discussing his new book ‘Crash Course: From the Good War to the Forever War.’ After spending fifty years as a cultural critic, Franklin attempts in this book to present a set of hard-learned lessons about modern America’s foreign policy exploits, as well as its tactics used at home to crush organized labor, antiwar, and civil rights movements.
H. Bruce Franklin is a former Air Force navigator and intelligence officer. In 1972, he was famously fired from Stanford University for allegedly inciting students to riot. His termination brought national attention to the issue of academic freedom. He is the author or editor of nineteen books and received lifetime achievement awards from the American Studies Association and other major academic organizations.
About the Sounds of Film
The Sounds of Film is the nation’s longest running film and music themed radio show. For the past 30 years, the program has delivered a popular mix of interviews and music to listeners all over Long Island, parts of Connecticut and streaming live worldwide on the internet at wusb.fm. Past people interviewed for the show include Eric B., Matthew Broderick, Don Lemon, Dave Rubin, Aloe Blacc, Michael Penn, Krishna Das, director Gillian Armstrong,  musician/composer Warren Ellis, DA Pennebaker, and Carmine Appice.