Alligator Turned in in Long Beach

A 14-inch American alligator was turned in to Long Beach Animal Control on October 23, 2014. 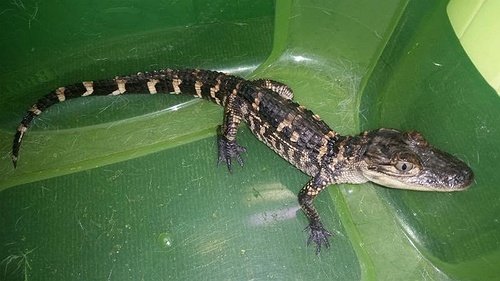 The alligator and tank was given to the animal control office by an unknown female who only stated that she was moving. Long Beach officials notified the Nassau County SPCA.

This is yet another example of illegal alligators being found on Long Island.

Nassau County SPCA officials are very concerned. These alligators are not meant to be pets. They can grow upwards of 10 feet and cause serious bodily harm.

The Nassau County SPCA urges anyone who has information regarding a person in possession of dangerous animals to call  516-THE-SPCA. To Report Animal Cruelty call 516-THE-SPCA, email crueltystoppers@ncspca.us or use our online form.

If are reporting an emergency, or that an animal is it about to be imminently injured or killed, CALL 911 and request immediate police response.