Suozzi: “Long Island Has the ‘Right Stuff’ to Build Rockets for the 21st Century”

Brings Space Industry Leaders Together to Give Local Industry a Boost. 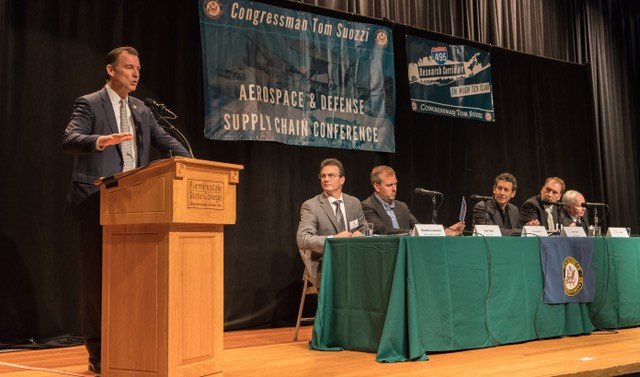 Farmingdale, NY - October 22, 2018 - On Friday, Congressman Tom Suozzi (D – Long Island, Queens) hosted his 2nd Annual Long Island Aerospace and Defense Industry Suppliers Conference. This year’s conference brought together senior executives from Virgin Orbit, Northrop Grumman and BAE, as well as new and exciting companies like Launcher, a startup that is building rockets on Long Island. The Congressman led the panel’s focus on the boundless opportunities presented by the rapidly growing commercial and defense space industry and how Long Island can continue to be a key player by seizing 21st technologies to grow and expand business.
“We need to be on the cutting edge and constantly innovating to remain competitive,” said Congressman Tom Suozzi. “Long Island is the ‘Cradle of Aviation,’ we built the lunar module that landed on the moon and we can build rockets for the future. Long Island already has the ‘Right Stuff’ to recapture the public’s imagination, compete in this century’s space race and remind the world that Long Island is still the home of a vibrant community of high-tech aerospace and defense companies.”
The featured speakers included:
“Space is undergoing a transformation with new capabilities from smaller, lower cost, spacecraft and launchers coming onto the scene,” said Dan Hart, President, and CEO, Virgin Orbit. “This is a time of opportunity for companies with bold visions and innovative staffs. At Virgin Orbit we are poised to enable the next generation of space-based commerce, scientific discovery, and security through our LauncherOne, a responsive air-launched satellite launch service. We appreciate Congressman Suozzi’s support and focus on the aerospace industry and space exploration in the 21st century.”
“Launcher is designing and building a rocket to launch the new generation of small satellites to orbit. We are designing and testing today on Long Island, and hope to eventually set up our manufacturing facility here too,” said Max Haot, Founder and CEO, Launcher. “We support Congressman Suozzi’s aspirations for Long Island and look forward to working closely with him to generate support for the endeavor, develop the necessary infrastructure, and build coalitions and partnerships to deliver on our mission.
“We appreciate Congressman Suozzi’s work in assembling this distinguished panel of defense and commercial space businesses, which all contribute to next-generation technology pursuits for government and private sector customers,” said Ricardo Gonzalez, Director of Space Systems at BAE Systems. “Long Island is a hub for defense engineering and manufacturing, and shining a spotlight on the innovative work being incubated right here is an endeavor that we applaud.”
“I appreciated the opportunity to discuss Northrop Grumman’s cutting-edge work and additive manufacturing at Congressman Suozzi’s Aerospace and Defense Industry Supplier Conference.  Our company is proud of our rich heritage on Long Island and our enduring advanced work in the community. We appreciate Congressman Suozzi’s leadership on National Security issues and for convening today’s constructive forum,” Chris Gettinger, Director, Advanced Propulsion & Systems, Northrop Grumman.
“It’s great to have a champion like Congressman Suozzi to shine a light on the aerospace industry’s continued presence on Long Island and promote its expansion,” said Len Poveromo, Executive Director of the Composite Prototyping Center. “We have a storied history and are proud of our significant technology developments and contributions, to the industry. Long Island has the expertise, facilities and the passion to grow, continue to innovate and play a major role in the cutting-edge technologies for the next phase space exploration.”
The conference was held at SUNY Farmingdale and was attended by over 200 senior executives and industry experts from leading aerospace and defense companies. Participants included prime contractors such as Northrop Grumman, BAE, Lockheed Martin, Harris Corp., Raytheon, along with over one hundred local suppliers.