Nineteen canine police officers in the Class of 2015 graduated from MTA Police explosives detection and anti-terrorism training this morning in a ceremony at Grand Central Terminal. 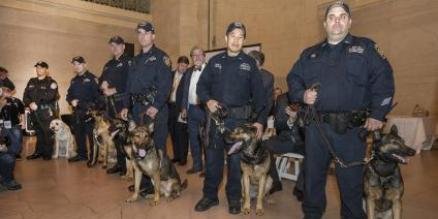 New York, NY - October 21, 2015 - Nineteen canine police officers in the Class of 2015 graduated from MTA Police explosives detection and anti-terrorism training this morning in a ceremony at Grand Central Terminal.

The dogs and their human partners trained on a 72-acre rural campus in Stormville, N.Y., in Dutchess County. A new canine training academy built on the site is almost completed and will soon be dedicated.

Fifteen of the graduating dogs will now join their human partners in active duty for the MTA Police Department. They will inspect suspicious packages and patrol the trains, stations, tracks and facilities of the Long Island Rail Road, Metro-North Railroad and Staten Island Railway, a 5,000-square-mile territory covering 14 counties in New York and Connecticut.

Four of the canines who graduated today will join MTA PD sister agencies, the United States Park Police and the Putnam County Sheriff’s Office. They are among the regional partners of the MTA in law enforcement who send dogs to the MTA for training.

The MTA Police Department has one of the largest canine explosives detection forces in the country, with approximately 50 dogs in service. Last year, the canines responded to 25,860 requests for assistance, and inspected and cleared 2,584 unattended packages.

Dogs are approximately one year old when they go through the rigorous 12-week training course. They live with their human partners, and can serve in active duty for up to eight or nine years before retiring. MTA Police dogs are most often German shepherds, but some are Belgian Malinois or Labrador retrievers.

The MTA Police Department’s Canine Unit was established in 2002 to protect train customers and the public from criminal acts and to assist in reducing railroad service disruptions by expediting inspections of unattended packages. Canines can do in minutes what can take hours for humans to do when searching for explosives or other evidence in crimes.