Since opening its doors four years ago, one of Long Island’s biggest nightclubs, restaurant, outdoor beer garden, bar, catering hall, and live music venues- Patchogue’s The Emporium, has put on some of the best events ... 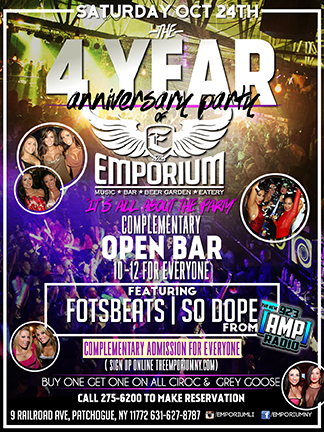 Patchogue, NY - October 20, 2015 - Since opening its doors four years ago, one of Long Island’s biggest nightclubs, restaurant, outdoor beer garden, bar, catering hall, and live music venues - Patchogue’s The Emporium, has put on some of the best events the entertainment world has to offer, and they’re only getting warmed up! With some of the top live music acts on its stage in every genre imaginable from Ja Rule to Taking Back Sunday, Sam Hunt to Brett Michaels- the 1,100 capacity space is also one of the best dining establishments around, providing catering for a number of events including Roger & JP of WBAB’s hit “Wild Game Party” earlier this year. Having had such great success since its inception, there’s plenty reason to celebrate as “Long Island’s Biggest Dance Party” returns to celebrate The Emporium’s 4-year Anniversary on Saturday, October 24th at 10PM with 92.3 AMP Radio’s So Dope and Fotsbeats!

Owners Tim Lorito and Matt Dill fulfilled their vision of creating a unique multi-purpose venue in 2012, with their goal being to present high quality live entertainment with great genre diversity. Combined with offering excellence in restaurant services which are highlighted by an outdoor beer garden, the venue blends into an exciting and fun event space! Designed solely by Dill,  the venue was developed and built to provide a world-class musical entertainment experience for both the audience and the performing artists. Lorito has vast experience in marketing, promoting and building brands, and he’s been on the forefront of creating new concepts that have flourished nationally. Tim was raised in a music business environment by his father, Phil, who managed and developed a number of talented artists and bands including Cyndi Lauper, Michael Bolton, Zebra, Frank Carillo, Bob Mayo with Peter Frampton, Bruce Kulick and Alan St. Jon with Billy Squier, and he’s lent his decades of music industry experience as a special consultant in the creation of The Emporium.

Four years on and the venue with the “hip steel feel of Williamsburg with the warm wood details of its original roller rink environs” (Linda Leuzzi, LI Advance) has had thousands through its doors each week due in part to “some of the best hospitality and service”  and a staff that is “extremely accommodating and helpful”. With a continued lineup in the coming weeks and months that includes DJ Camilo, Bless the Fall, Omarion, Cole Swindell, Chase Rice and Badfish: A Tribute to Sublime, a B-52’s classic seems to ring true as "The sign says: Stay away fools - the club rules, at the Love Shack.", and this is one club that certainly does rule!

With the 4th Anniversary Party on Saturday, October 24th drawing near, there’s more than enough reason to celebrate for “Long Island’s Biggest Dance Party” with 92.3 AMP Radio’s So Dope and Fotsbeats! With a complimentary OPEN BAR 10PM-12AM and FREE ADMISSION on the Guest List, The Emporium has one of the biggest celebrations in store as it gets ready to celebrate four years strong at 9 Railroad Ave. Patchogue, NY 11772!