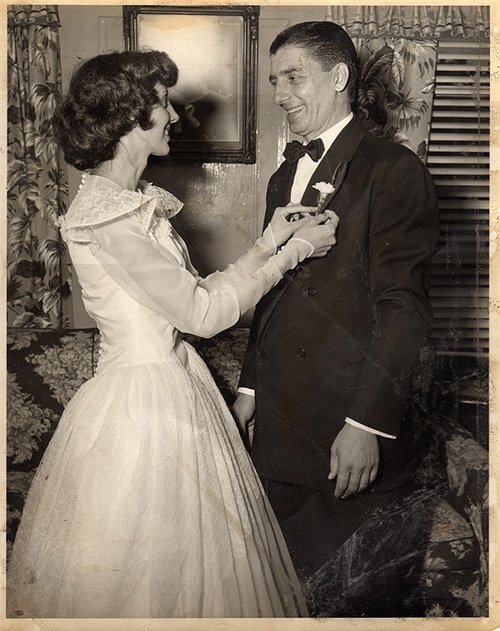 Massapequa, NY - October 16, 2015 - Sue Fischetti of Massapequa, Long Island, never expected to see her 63 year old wedding photo again after it disappeared when Hurricane Sandy hit the New York region (October 22 to 31, 2012).  Leah Welsh found the photo buried in a pile of debris that washed up on her lawn and saved it for two years before finding Fischetti who lived only four houses away.

With the photo back in her possession, Fischetti's doubts now turned toward whether the photo could ever be restored after being blown around in pounding rain and damaged by mud and sand.

Xiomaro, a nationally recognized artist from Roslyn Heights, read about her plight and offered to restore the photo at no charge.  “I am frequently commissioned by the National Park Service to photograph historic homes such as Theodore Roosevelt’s Sagamore Hill.  So I have an interest in preservation and conservation.”

After removing surface dirt, Xiomaro created a high-resolution scan of the photo, placed a grid over the image and then began the methodical and tedious process of digitally restoring each square.  Dozens of test prints using different papers were made from the digital file until a final photo was created that approximates what it might have looked like when it was brand new in 1949.

The artist will be presenting the new print in a matted frame to Fischetti during the anniversary of Hurricane Sandy.

The photo shows Fischetti in her bridal grown pinning a boutonnière on her proud father, Charlie.  The violence of the storm tore the photo out of the original wedding album where it was stored under plastic along with about 100 photos that remain lost.  At $75 billion, Hurricane Sandy was one of the costliest storms in U.S. history.

Additional photo restorations can be seen at the artist's website.