Great Play of Syosset: Teaching Kids Motor Skills While Having Fun at the Same Time

Great Play specializes in making it fun for kids to develop motor skills, sport skills, fitness and coordination in and ever changing environment. 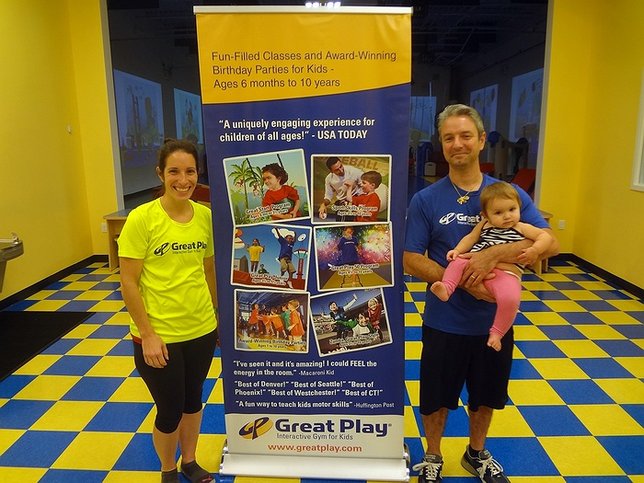 Cara and Tom Talento, owners of Great Play of Syosset.

Syosset, NY - October 17, 2018 - Great Play is a nationwide, interactive children’s gym franchise that originated in Stamford, Connecticut. It specializes in making it fun for kids to develop motor skills, sport skills, fitness and coordination in an ever-changing environment, providing kids with the foundation needed to become healthy and active adults.
Tom and Cara Talento first opened the doors of Great Play of Syosset for business in August of 2016. Oyster Bay residents, Tom had formerly been a career firefighter with the Garden City Fire Department, and Cara had worked as a physical education teacher in New York City.
However, the couple soon both experienced professional changes in their lives; Tom was let go from the fire department, and Cara had a baby, after which she said that she felt the desire to take her life in a different direction. 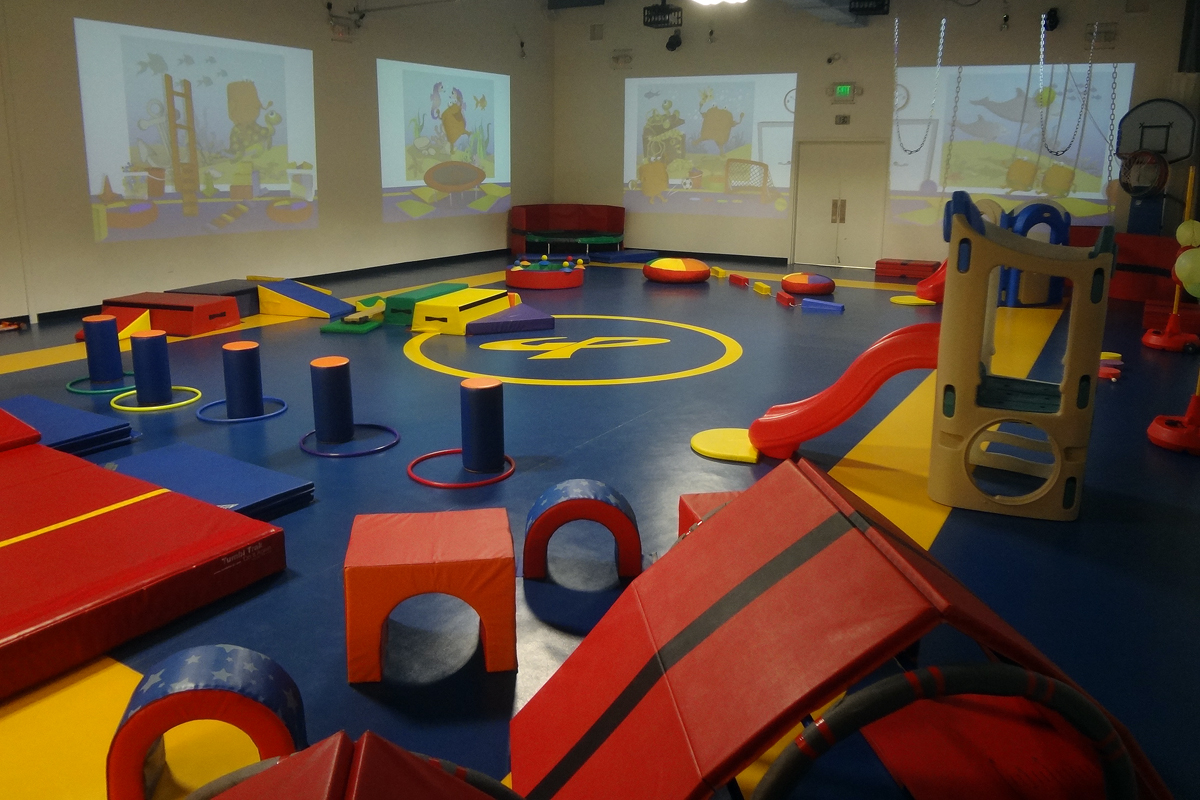 Great Play of Syosset specializes in making it fun for kids to develop motor skills, sport skills, fitness and coordination in and ever changing environment. Photo Credit: Chris Boyle
Both Tom and Cara started out on the search for new careers, but initially the plan was not for the two to go into business together. But after telling a business broker about his wife's previous career in physical education, it was suggested that the couple get involved with the Great Play franchise, a concept that Cara said she immediately took a liking to.
“I was very interested in this the moment I heard about it...we went to find out more and the fact that the curriculum is taught in the specific way that I was taught to teach was very appealing,” she said. “It's very scientific and by the book...it's not just gymnastics-based, like a lot of other gyms catering to children are. I like that it concentrated on developing the full body, and I really felt like it was for us.”
“I was looking for a feel-good business, and that was one of the things I immediately noticed about Great Play,” Tom added. “99 percent of the time people come to us and the kids are having a great time, the parents are having a great time, and in the end you get to know these children in a way that you never really expected. It's really cool.” 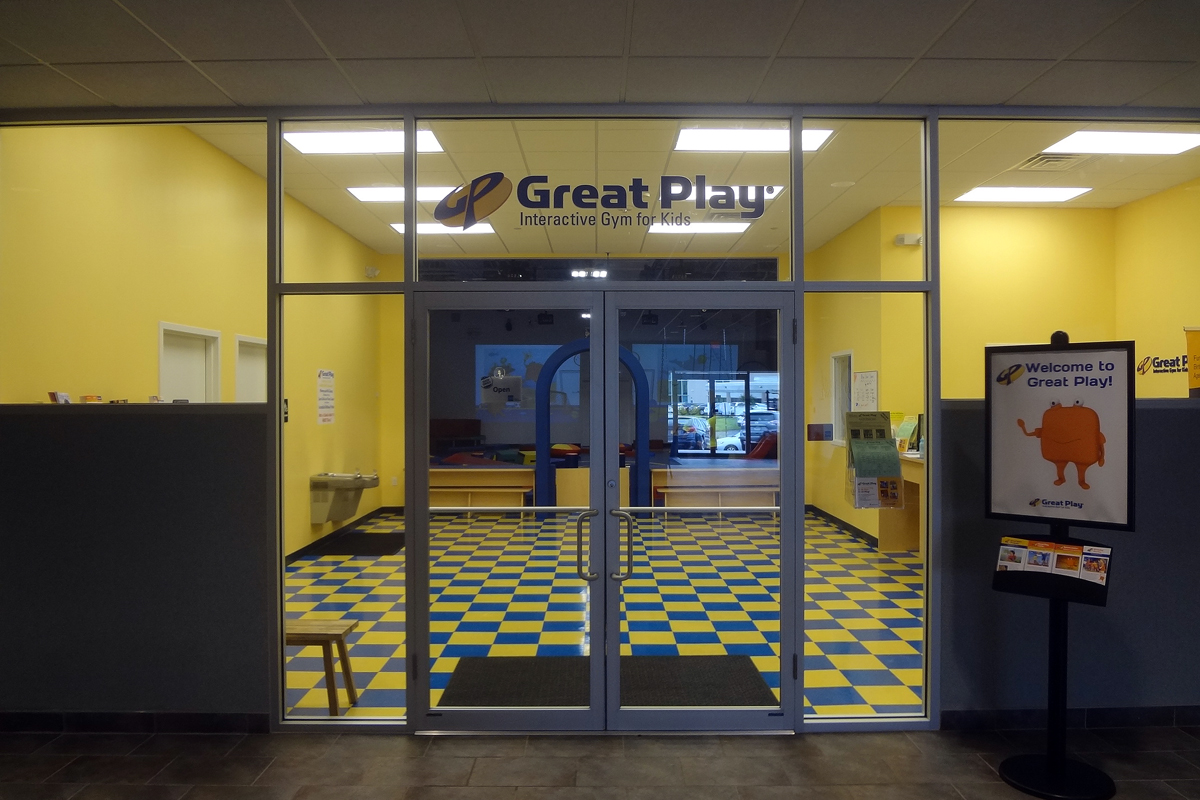 Great Play of Syosset providing kids with the foundation needed to become healthy and active adults. Photo Credit: Chris Boyle
Great Play of Syosset focuses on helping children develop proper locomotive abilities, spatial awareness, stability, manipulative skills, physical fitness, and much more; all traits that are vital for growing up healthy and strong, Cara noted.
“Our classes range from ages 6 months up to 10 years old and we basically work on all aspects of creating a full body, as opposed to just muscle strength in each class,” she said. “Working on developing both the physical and social aspects of children is very important especially in this day and age. When my husband and I were growing up, we used to go outside and play with the neighborhood children, but children aren’t doing that anymore. Society norms have changed and children are staying inside and playing more on screens individually. Great Play is a place where they can come without their electronics, physically move, and develop the well-being of their total self.”
The 1,800 square-foot gymnasium at Great Play of Syosset is a wondrous place consisting of a multitude of multicolored objects, obstacles, and playthings that can be manipulated, moved about, and configured to serve just about any purpose that any given class may require. Great Play’s patented interactive arena surrounds the play area and is made up of 8 projectors with a series of sensors that change with every activity taking place on the gym floor, adding a strong motivational aspect to the proceedings making all activities and classes feel new. 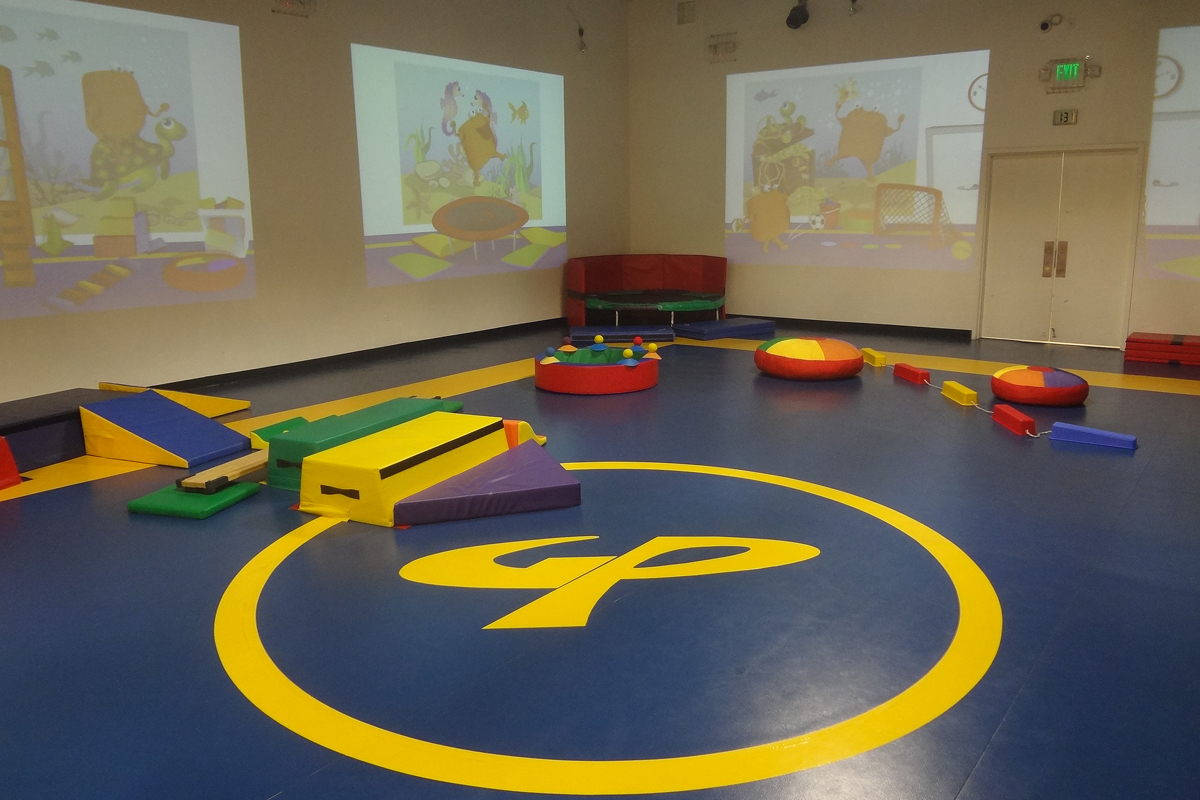 Great Play of Syosset works on all aspects of creating a full body, as opposed to just muscle strength. Photo Credit: Chris Boyle
“It's part of the way that the children know that we're moving on to our next task,” Cara said. “The screens and the music change, so we'll have free play going, but then we'll change the screens and Buddy – Great Play’s mascot – will let the kids know that it's time to come to the big yellow circle in the middle of the floor for the next exercise.”
While the rigors of owning your own business and striving to make it a success can be stressful for anyone, Tom and Cara nonetheless say that they both greatly enjoy the opportunity of working together every day. Being the parents of four children themselves, it affords the two the ability to spend more time together as a family than most working couples ordinarily have the luxury of doing. 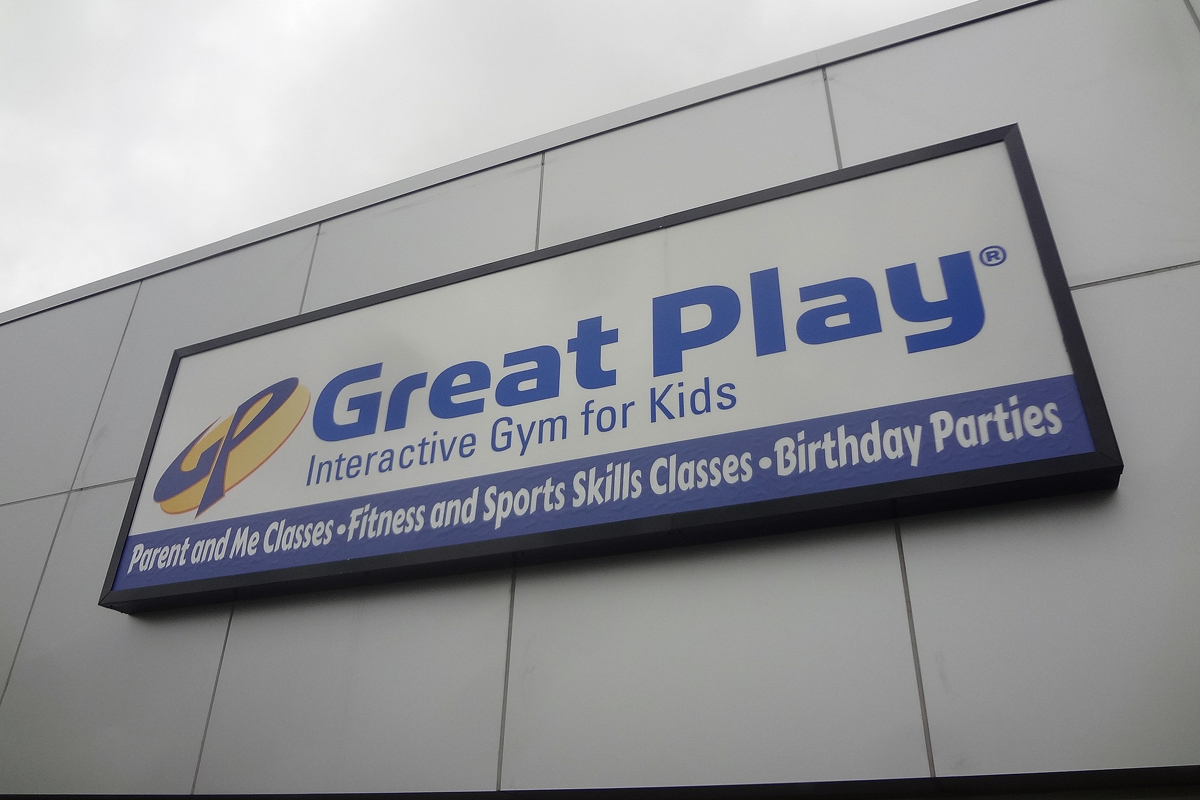 Great Play of Syosset is located at 180 Michael Drive. Photo Credit: Chris Boyle
“It's great being able to spend so much time with my wife and kids,” Tom said. “It's a very kid-friendly place, so we can bring them here often, and they understand exactly what we are doing at 'work' because they love it too! We have put a lot of time, money, and effort into making this business succeed, and it's great being able to do this together as a whole family.”
Now in their third year of business, Cara noted that the Great Play brand is starting to achieve a level of mainstream recognition that is serving to differentiate their gym from competitors. People are seeing everything that Great Play has to offer, and business has been steadily picking up on a regular basis as a result.
“Some of our competitors have been in business for 30 years, but now a lot of parents are discovering us and they're really becoming enthusiastic about the brand,” Cara said. “Our teacher-to-student ratio is smaller, so kids get more one-on-one time than they would at other gyms. Also, a lot of other gyms are solely gymnastics-based and their equipment is stationary. But all of our equipment moves...nothing stays the same from one activity to another or from week to week for 18 weeks. We're a lot more versatile, and we're constantly doing different things to ensure greater overall development of the child while making sure they still have a lot of fun.” 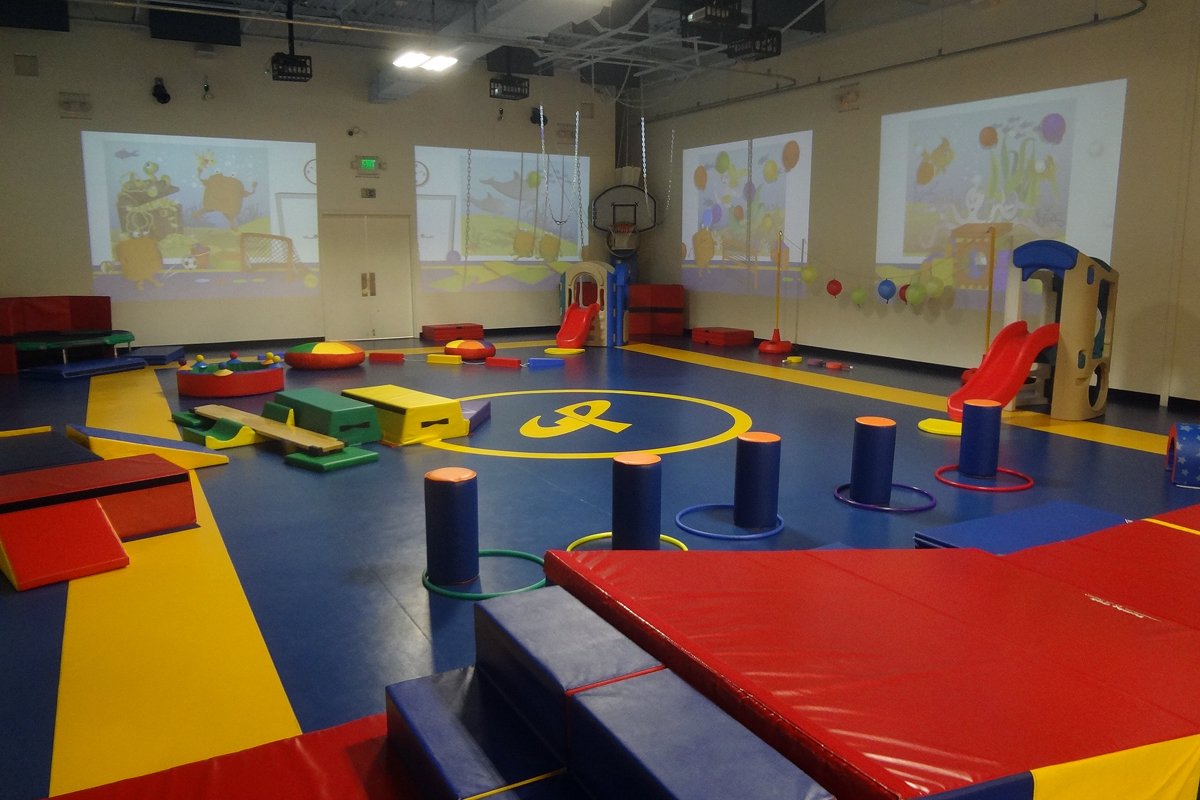 The 1,800 square-foot gymnasium at Great Play of Syosset is a wondrous place that can be configured to serve just about any purpose. Photo Credit: Chris Boyle
As parents themselves, Tom and Cara can honestly say that Great Play is the type of place they would bring their own kids to…even if they weren't the owners!
“We’re used to being in the mix of it all and know how crazy life can be,” Cara said. “We bring our own kids here, and they love it…if our kids didn't love it, we certainly wouldn't be asking other people to bring their kids here.”
In addition, Great Play of Syosset also hosts birthday parties every weekend, so if your child’s special day is coming up, this is definitely a venue that you would want to look into if you want your young partygoers to have a great time.
To find out more, please visit Great Play of Syosset’s website.