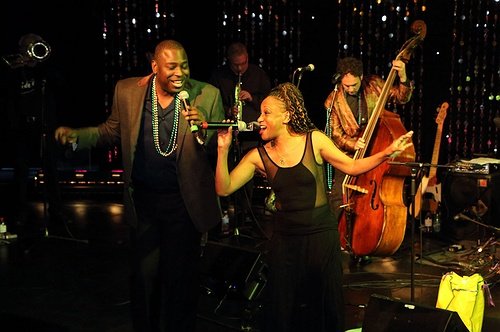 Sag Harbor, NY - October 16, 2015 - Bay Street Theater and Sag Harbor Center for the Arts is pleased to announce Halloween Costume Ball with the HooDoo Loungers, a cash bar, carnival games, costume contest and local radio celebrity judges on Saturday, October 31 at 8 pm. Doors open at 7: 30 pm. Tickets are available by calling the Box Office at 631-725-9500 or online. The party is for ages 21 and up.

The evening will feature a live band, the HooDoo Loungers, carnival games with adult prizes including a FREE drink at the bar. The evening will conclude with a costume contest at 10 pm, judged by local celebrities and awarding $850 in cash prizes.

The HooDoo Loungers are a nine piece band inspired by the music, traditions and celebrations of the city of New Orleans. Their sound, a mixture of original tunes and traditional New Orleans classics, encompasses the R&B of Fats Domino, the Jazz of the Preservation Hall Jazz Band and the funk of the Neville Brothers and Dr. John. Band leader Joe Lauro says "the idea is to have maximum fun! Or as Jelly Roll Morton used to say ‘Everything in the line of hilarity!’”

On Halloween the HooDoo's will be pulling out all the stops with guest appearances by "Wolfman Tommy," "Cool Cat Sarah" and other well-known East End performers in sinister disguise. VooDoo will certainly be in the air and with an audience Costume Contest hosted by WPPB’s Bonnie Grice and Ed German, WLNG's Gary Sapiane and WBAZ’s Walker Vreeland.

Ed German (WPPB Radio) is the Host and Producer of the Urban Jazz Experience, centering around mid-20th century progressive jazz and entertainment. Ed is also Host and Producer of Friday Night Soul -- dance and romance music from the 50's to the 80's, including Soul, Disco, Latin ad Old-School hip hop.

Bonnie Grice (WPPB Radio) is an award winning broadcaster, producer, interviewer and DJ. A two-time Gracie Allen Award winner, you can hear BONNIE IN THE MORNING weekday morning’s 9-Noon on 883WPPB-- Long Island's only NPR station. Bonnie serves up a daily dose of music, special guests and food for thought. Unique. Informative. Fun. A new spin on Public Radio. Plus she produces and hosts THE SONG IS YOU featuring a wide range of guests exploring their top 10 favorite tunes every week. Tune in! And follow her on: Facebook Twitter and Instagram. Bonnie also loves acting... she's been featured in a variety of East End theatre productions. And she's been host/interviewer of the Hamptons Take 2 Documentary Film Festival since its inception in 2008.

Gary Sapiane (WLNG Radio) is from Westhampton Beach, Long Island, New York. Gary started in radio when he was a junior at the Westhampton Beach High School. Gary's first radio gig was with WAPC Radio in Riverhead, Long Island, New York. Gary went on to be one of the owners of WKVO Radio in Havelock, North Carolina. Gary actually read his first commercial on the air at WLNG when Gary stopped by to visit the late Paul Sidney in 1964. Gary worked weekends at WLNG in 1970, and in 1975, Gary started full time. In 2008, after Paul Sidney had passed away Gary became the station manager, and in 2012, Gary became President of Main Street Broadcasting, Inc. Gary's hobbies include Storm Chasing (especially tornados), aviation and riding the Cross Sound Ferry between Orient Point Long Island, New York and New London Ct during Winter Nor'easters.

Walker Vreeland (WBAZ Radio) is an award-winning radio personality who hosts The Afternoon Show on 102.5 WBAZ-FM in The Hamptons. Walker began his radio career on Long Island in 2005, and since then he’s enjoyed getting to know his listeners, airing his personal business, gossiping about celebrity news, and interviewing guests from all facets of the entertainment industry. Deeply passionate about conversing with artists, Walker has interviewed such stars as Cyndi Lauper, David Brenner, Sally Struthers, James Frey, Paula Poundstone, Cheech Marin, Sandra Bernhard and Jane Krakowski. In addition to hosting the Afternoon Show, Walker also serves as a Producer, Copywriter and Voice Over Artist with Long Island Radio Broadcasting, LLC. As a radio personality, he has been heard on 92.9 & 96.9 WEHM on Long Island, 103.9 WFAS in Westchester, NY, 96.7 ‘The Coast’ in Norwalk, CT and WEBE 108 in Bridgeport, CT. As an actor and singer, Walker’s worked extensively in theater, film and television. New York theater credits include: Little Women (with Deborah Gibson & Elaine Stritch), Erostratus, Just So Stories (Theaterworks USA), and the award-winning musical revue, Our Life & Times (Winner of 1999 MAC and Bistro Awards). He originated the role of Arthur in Arthur’s Christmas at The Vineyard Playhouse and has done several national tours. He’s been seen on MTV, VH1, CBS Daytime (Guiding Light) and his films include: Sex Farce, Thinking Out Loud, A Beautiful Mind and most recently, the short film Boys of Summer. In the spring of 2013, he performed the latest incarnation of his autobiographical monologue From Ship to Shape at Guild Hall in East Hampton and at Bay Street Theater last month. A member of Actors’ Equity Association, he is a graduate of Walnut Hill School for the Arts, New York University’s Tisch School of the Arts and Connecticut School of Broadcasting. Walker was voted Best Media Personality in the Hamptons of 2013 and 2014 (Platinum Award) by Dan's Papers.