The New York State Department of Environmental Conservation (DEC) today urged outdoor adventurers to suspend exploration of cave and mine sites that serve as homes for bat hibernations. 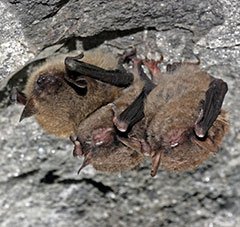 Albany, NY - October 15, 2015 - The New York State Department of Environmental Conservation (DEC) today urged outdoor adventurers to suspend exploration of cave and mine sites that serve as homes for bat hibernations. Human disturbances are harmful to the state's bat population since the arrival of the disease known as white-nose syndrome, which has killed more than 90 percent of bats at most hibernation sites in New York.

All posted notices restricting the use of caves and mines should be followed. If you encounter hibernating bats while underground you should leave the area as quickly and quietly as possible.

Experts believe that when bats are disturbed during hibernation periods, it forces them to raise their body temperatures, which causes their fat reserves to be depleted. This affects their energy levels and places the bats in a comprised state, which can often lead to death.

There are two species of bats currently protected under federal and state endangered species law. The Indiana bat, which is sparsely distributed across New York and beyond, is a federally threatened bat that was listed before white-nose syndrome began impacting bat populations.

The northern long-eared bat is protected as a threatened species under both federal and NY State Endangered Species law. The current population for this formerly common bat is approximately one percent of its previous size, making it the species most severely affected by white-nose syndrome. Nonetheless, northern long-eared bats are still very widely distributed in New York. Their presence is documented in most of the 100 or so caves and mines that serve as bat hibernation sites in the State.

Anyone entering a northern long-eared bat hibernation site from October 1 through April 30, the typical period of hibernation for bats, may be subject to prosecution.

There is currently no treatment for addressing the impact of white-nose syndrome on bats but the DEC remains committed to finding a cure. Along with the New York State Department of Health, the DEC has teamed up with researchers from the National Wildlife Health Center in Madison, Wisconsin, and experts at a number of universities across the country to better understand the disease and focus on developing a treatment.

By cutting trees during the winter, direct impacts to roosting bats can be avoided. DEC also encourages homeowners with bats in their attics or barns to explore non-lethal means of removing them from the structure.

For more information about white-nose syndrome and what you can do to help see: White-nose Syndrome website (link leaves DEC website.)

Details about the protection of the northern long-eared bat can be found on: US Fish and Wildlife Services Endangered Species webpage (link leaves DEC website.).