Police Officer Salvatore Mingoia passed away after a nearly two-year battle with lymphoma. 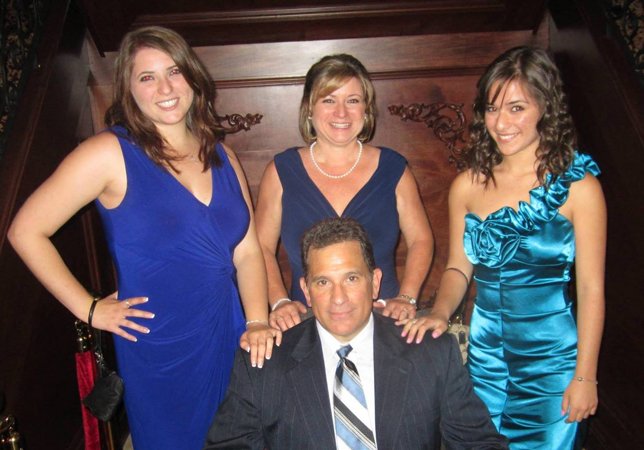 Police Officer Salvatore Mingoia with his wife of 27 years, Denise, and two daughters, Samantha and Gina.

Suffolk County, NY - October 12, 2017 - The Suffolk County Police Department is mourning the loss of active duty Police Officer Salvatore Mingoia who died early this week after a nearly two-year battle with lymphoma.
Officer Mingoia joined the department in April 1987 and spent his career in the Fifth and Sixth Precincts, Property Section and most recently, Crime Scene Section, where he has been assigned since February 2008. Before joining the department, Officer Mingoia, one of seven children, graduated from Centereach High School where he ran track and field. As an adult, he earned his associates degree from Suffolk County Community College.
Officer Mingoia was a lifelong music-lover and an avid musician. As a kindergartener, he brought his guitar to school for show and tell. Officer Mingoia was a member of numerous cover bands playing the music of Crosby, Stills and Nash, James Taylor and others. Mingoia, a Shoreham resident, is survived by his wife of 27 years, Denise, and two daughters, Samantha, 25, and Gina, 19.
“He was the nicest person in the world,” Samantha Mingoia said of her father. “He always had time for everyone. He was always telling jokes, never stopped making jokes. He was our world. I don’t know what we are going to do. I don’t know what a day is going to look like now.
She added, “He’s tough, he always did what he had to do for us. I think his battle with cancer was that he didn’t want to lose the fight for us. He fought for his own life but so much of it was for us.”
Officers Mangoia’s work family echoes the sentiments of his always pleasant personality.
“He was a tremendous man,” said Sgt. Arthur Hughes, who worked with Officer Mingoia for more than 30 years. “He was a sweetheart of a man. Everyone loves Sal; you can’t say anything bad about him. Anytime there was a fundraiser or anyone needed help, he was there. He would use his music, playing free of charge, at fundraisers, just trying to help anyway he could. He couldn’t do enough for his community.”
“He was truly one of the nice guys,” said Detective Lieutenant Darrel Simmons, Mingoia’s first partner. “A great guy with a great attitude. Always upbeat, always smiling, always happy. Sal, you were loved beyond words and will be missed beyond measure!”
"Even while enduring his personal battle with cancer, Officer Mingoia continued to serve the department and his community with distinction," Police Commissioner Timothy D. Sini said. "His perseverance in the face of adversity embodies the spirit and dedication of all our police officers. On behalf of the entire Suffolk County Police Department, it was an honor and a privilege to work alongside Officer Mingoia. His life and service will never be forgotten."
"Sal Mingoia was not only a valuable and productive member of our department, he was a caring, generous and uplifting individual who inspired those around him with his dedication to family and community," Chief of Department Stuart Cameron said.