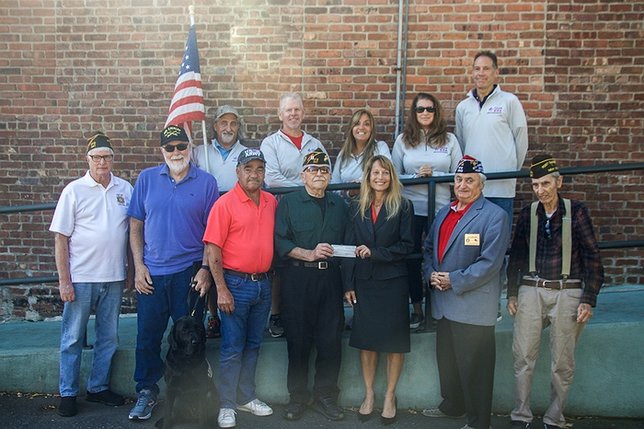 Eva Casale with Team E.V.A. presenting a check for $2500 to the veterans of Glen Cove VFW Post 347 with support from the Jack Stein VFW Past County Commander (second from right).

Each year, when Long Island resident Eva Casale sets a goal of running 7 marathons in a 7-day span, her focus is on the mission and end result. Through the hard work, sweat, mental and physical challenges, Casale does what many consider the impossible to do and what she considers the most important: raising money for active military and veterans. On Thursday, Oct. 7, Casale, founder of Team E.V.A, which appropriately stands for “Every Veteran Appreciated,” surprised the VFW Post 347 in Glen Cove with a $2,500 donation to let them know that they are appreciated after a season of hard loss and tragedy.
Following a fire at the local headquarters in late August, the Glen Cove VFW Post suffered thousands of dollars in damage, a large portion of which was not covered by insurance. Team E.V.A.’s donation, generated from Casale’s fifth year of holding her annual fundraising event, will help repair some of the damages and go towards rebuilding the storied structure.
“I truly feel humbled to be able to support the Glen Cove VFW Post 347 especially during such a trying time,” said Casale. “Our veterans have done so much for our country and to see them lose their ‘home’ and meeting space with this fire is heartbreaking.  This donation is a small way to thank our veterans for their service and will hopefully make a difference for them moving forward.”
“We are so grateful for Eva’s tremendous support to aid us in rebuilding our headquarters,” said Henryk Nowicki, VFW Post Commander. “With such a shortfall in funding by insurance, this generous donation will help us to act on our much-needed repairs quickly and without worry.” “To experience such a hardship two months ago truly put the Glen Cove VFW Post at such a loss as this is the space that has been there for their holiday remembrances, celebrations, picnics and so much more,” added Jack Stein VFW Past County Commander. “Eva’s donation has helped turned one of their darkest days into light again,” he continued.
The Oct. 7 donation to the Glen Cove VFW marks the first of several support checks being issued to veterans’ organizations throughout Long Island by Team E.V.A. This year, Casale and her team have raised over $30,000 to support local veterans and their families including active military and fallen heroes.
Team E.V.A. is an organization that raises funds to support services and supplies for veterans.
Next month, Team E.V.A. will host a one-day only running event in honor of North Shore’s Fallen Heroes Day on Veterans Day (November 11).  The 23-mile run will begin at West Harbor Beach in Bayville with the route winding through Oyster Bar, Locust Valley, Sea Cliff before ending in Glen Cove. A 5K distance event will also start from the Downtown Café at 4 School Street in Glen Cove.
For more information, visit www.GoTeamEva.org.
To support the Glen Cove VFW Post 347, please feel free to send any financial contributions to VFW Post 347, 15 Hill St, Glen Cove, NY, 11542.