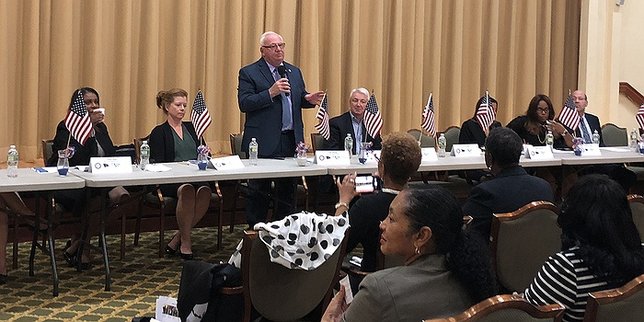 Amityville, NY - October 10, 2018 - Senator John Brooks last night attended a multi-candidate forum presented by the Central Long Island NAACP. The event was organized by the Central Long Island NAACP, the Long Island Chapter of the National Coalition of 100 Black Women, the Eastern Shore Chapter of The Links, Inc., and Ministerial Alliance of North Amityville and Vicinity. Senator Brooks’ opponent, Jeff Pravato, refused to participate in the event and did not show up.
“It was a real pleasure to join the dozens of voters and community members who attended this important forum,” Senator John Brooks said. “Voter forums are an opportunity for Long Island families to speak directly with those of us who are seeking to serve them. The fact that my opponent refused to attend this important voter forum presented by the Central Long Island NAACP is deeply concerning and unacceptable. I will keep discussing the issues that matter to Long Island families with the constituents I am campaigning to represent in the State Senate.”
Viscel Moore, Member of the Executive Committee of the Central Long Island NAACP and Co-Chairwoman of the Event, said, “The forum presented by the Central Long Island NAACP was organized to give local community residents the chance to hear directly from their elected officials and candidates for office. We are grateful that Senator Brooks joined us and took the time to discuss important issues with local voters and families. We reached out twice to Jeff Pravato and never received a response to our invitation. It is disappointing that Jeff Pravato did not participate and give his potential constituents a chance to ask him about the issues facing our community.”
Reverend Dr. Keith Hayward, President of the Ministerial Alliance of North Amityville and Vicinity, said, “Elections give the people an opportunity to hold their public servants accountable and truly exercise power through the ballot box. Forums like the one organized by our community groups are essential to democracy because they provide candidates with a place to speak directly with large numbers of constituents. I am pleased that Senator John Brooks participated in our forum and I thank him for showing the respect of speaking with his constituents and discussing the issues that matter to our communities and all of Long Island.”
The voter forum was a well-attended event, with Democratic and Republican candidates discussing the issues raised by Long Island voters.