75 Airmen, One HC-130 Search and Rescue Aircraft, One HH-60 Pave Hawk Rescue Helicopter to be Deployed. 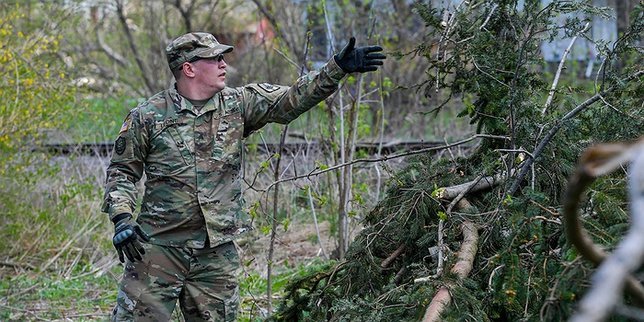 A member of the New York Air National Guard.

Albany, NY - October 10, 2018 - Governor Andrew M. Cuomo today announced that the New York Air National Guard is preparing to deploy 75 Airmen from the 106th Rescue Wing to assist in the response to Hurricane Michael which is expected to come ashore on the Florida panhandle today. The Airmen from the 106th Rescue Wing, which is based at Gabreski Air National Guard Base in Westhampton Beach, will deploy to Gulfport, Mississippi with one HC-130 search and rescue aircraft, one HH-60 Pave Hawk Rescue helicopter and two Zodiac inflatable rescue boats. In addition, the New York Army National Guard is preparing to deploy two CH-47 Chinook heavy lift helicopters to Tallahassee, Florida from the Army Aviation Support Facility at Rochester International Airport with as many as 20 Soldiers in support.
"New York understands the devastation that extreme weather can cause, and we stand ready, willing and able to help the states impacted by Hurricane Michael," Governor Cuomo said. "New Yorkers are always ready to help those in need, and we are committed to providing personnel, equipment and teams to help our southern neighbors recover as quickly as possible."
The HC-130 can conduct search operations from the air and can refuel HH-60 Pave Hawk helicopters in flight, which extends the range of the helicopters. Specially trained pararescue Airmen and Combat Rescue Officers will be part of the team from the 106th Rescue Wing. The CH-47 is a large double rotor helicopter which can carry up to 9.5 tons of cargo or up to 30 people.
At 7 a.m., the eye of Hurricane Michael was located about 90 miles south west of Panama City, Florida. Michael is moving toward the north near 13 mph. A turn toward the north-northeast is expected later this morning, with a turn toward the northeast expected this afternoon or tonight. On the forecast track, the eye of Michael is expected to move ashore over the Florida Panhandle later today, move northeastward across the southeastern United States tonight and Thursday, and then move off the Mid-Atlantic coast away from the United States on Friday.
The New York Army and Air National Guard deployed 132 Soldiers and Airmen to North Carolina and South Carolina in September when Hurricane Florence struck that region. That deployment included two HC-130 search and rescue aircraft, four boats and crews and an HH-60 Pave Hawk helicopter from the New York Air National Guard and two CH-47s and two UH-60s from the New York Army National Guard. The Airmen from the 106th Rescue Wing conducted aerial search missions as required.  The Army UH-60s-which were configured as medical evacuation helicopters-conducted patient transfer missions and a few rescues during the September deployment in response to Hurricane Florence. The New York Army National Guard CH-47s were used to transport critical supplies in South Carolina.
Yesterday, Governor Cuomo offered assistance to states currently forecasted to be impacted by Hurricane Michael and urged New Yorkers to make preparations to their homes and businesses before potentially heavy rains from the storm could impact the northeast.  Florida Emergency Management has begun to assess their needs and enter requests through the Emergency Management Assistance Compact.  New York stands ready, and will offer through EMAC, to deploy personnel and equipment, should the state's assistance be required.
New York has a long history of helping other states following natural disasters. In addition to sending similar assistance to Florida following Hurricanes Irma, Harvey, Maria, Matthew, Frances, Ivan, and Dennis, New York dispatched a multi-agency team of more than 300 individuals to assist Louisiana following Hurricane Katrina, as well as another 18-member team after Hurricane Gustav. Additionally, New York has sent crews of firefighters west many times to assist with containing wildfires.