The president held a conference yesterday to discuss the country’s current financial crisis. 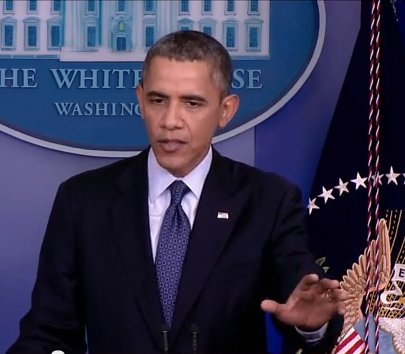 October 10, 2013 – President Obama held a news conference yesterday to address the public on issues concerning the government shutdown, which is now in its ninth day, and the debt limit which will be reached at the end of next week. The federal shutdown is largely the result of an inability of the Democrat-controlled Senate and the Republican-controlled House to agree on whether to modify or revoke or the Affordable Healthcare Act, key features of which will go into effect in January.

House Republicans, many of whom wish to defund “Obamacare,” have stated that they will not reopen the government or vote on a new debt ceiling unless changes are made to the legislation, but the President and other Democrats have accused the House of holding the government hostage over a law which has already been passed.

“This morning I had a chance to speak with Speaker Boehner,” said Obama. “And I told him what I've been saying publicly, that I am happy to talk with him and other Republicans about … But I also told him that having such a conversation, talks, negotiations shouldn't require hanging the threats of a government shutdown or economic chaos over the heads of the American people.”

The president added the he feels “members of Congress, and the House Republicans in particular, don't get to demand ransom in exchange for doing their jobs. And two of their very basic jobs are passing a budget and making sure that America's paying its bills.”

In his statement, Obama also said that the Senate has attempted to open a dialogue with the House on passing a budget, but the House has refused the proposal 19 times.

“Somewhere along the way, House Republicans decided they wouldn't appoint people to the committee to try to negotiate, and 19 times they've rejected that. So even after all that, the Democrats in the Senate still passed a budget that effectively reflects Republican priorities at Republican budget levels just to keep the government open, and the House Republicans couldn't do that either.”

The president expressed his belief that both he and congressional Democrats have shown reasonable willingness to discuss any issues Republicans are concerned about, and that the House is refusing to come to the negotiating table on any terms other than the revocation of Obamacare. “We can't do it if the entire basis of the Republican strategy is, we're going to shut down the government or cause economic chaos if we don't get a hundred percent of what we want,” he said.

Obama went on to express his concern over the looming debt ceiling, which if left to default will mean the nation cannot meet the financial obligations and agreements it has made with various entities for the first time in the country’s history.

“The last time that the tea party Republicans flirted with the idea of default, two years ago, markets plunged, business and consumer confidence plunged, America's credit rating was downgraded for the first time.”

Trying to lessen the volatility produced from discussions of debt, the president also clarified that raising the debt limit does not technically add to the nation’s loans in and of itself. “Because it's called raising the debt ceiling, I think a lot of Americans think it's raising our debt. It is not raising our debt. This does not add a dime to our debt. It simply says you pay for what Congress has already authorized America to purchase, whether that's the greatest military in the world or veterans' benefits or Social Security.”

When asked how the current shutdown and impending debt ceiling impact the US’s standing in the world and amongst its creditors, Obama said his “message to the world is the United States always has paid its bills and it will do so again. But I think they're not just looking at what I say; they're looking at what Congress does. And that ultimately is up to Speaker Boehner.”

At this point, however, the stance of the president and other Democrats remains far apart from House Republicans, and there is little indication any progress will be made or traction gained by either side. House Speaker John Boehner dismissed the president’s position that the financial crisis is unsustainable after hearing his remarks, and characterized Obama’s terms for opening discussions as “unconditional surrender.”