This the 16th consecutive year that the Colonials have qualified for the playoffs. 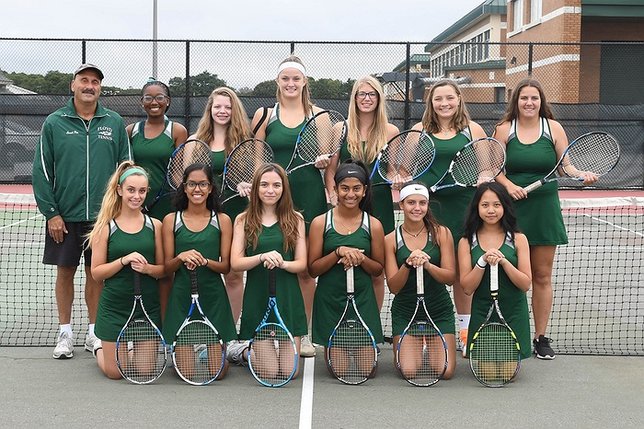 Mastic Beach, NY - October 8, 2018 - The William Floyd Colonials girls’ varsity tennis team recently wrapped up their regular season with a hard fought 4-3 victory over Eastport-South Manor, improving their overall regular season record to 10-6 good for third place in their 12-team division. This the 16th consecutive year that the Colonials have qualified for the playoffs, a remarkable span in which they have posted 10 or more wins in 14 of those seasons. The Colonials, under the leadership of the legendary high school tennis coach and two-time USTA Coach of the Year Dave Pia, look to bring that momentum into the playoffs.
This year’s team was led by returning senior and All-State player Hailey Loughlin, who anchored a strong doubles lineup consisting of sophomore Chandni Patel, sophomore Rachel Zummo, freshman Amanda Jones, junior Lindsey Boocock and sophomore Sophia Johnson.
The singles lineup was led by junior Alyssa Drell and sophomore Saskia DaSilva, who both won key pressure matches this year that helped lead the team to the playoffs. Also contributing to team's success this year with wins included senior Mia Murrell, junior Samantha Komnick, sophomore Alice Li and freshman Isabella Saladin.
After finishing in first place in their division the previous six seasons, Coach Pia began the 2018 season with a younger and less-experienced group, as seven of the team’s 10 starters from last season graduated.
Yet under his steady leadership and despite a shaky start that saw them lose their first three matches, the Colonials still found a way to clinch another playoff spot. The team rallied and bounced back in a big way to win 10 of their next 13 matches.
Each season Coach Pia preaches the same three goals to his team, “work up to your ability,” “show improvement” and “make the playoffs.” “I am happy to say we have accomplished all three,” he said.
On Saturday, October 6, the team will participate in the Individual Singles and Doubles Division Tournament at Shoreham-Wading River High School. This is a high-stakes tournament as it provides an opportunity for the student athletes to earn All-League, All-Division and All-County honors, as well as setting up an opportunity for All-State honors the following weekend at the All-County tournament. Team playoffs begin the week of October 15. Good luck to the Colonials in the upcoming tournaments and playoffs!