Once again, a new record has been set by a climber at The Adventure Parks of Outdoor Ventures—the popular zip line and ropes courses currently operating in six States. On September 23, 2015 Barbara (“Bebe”) ... 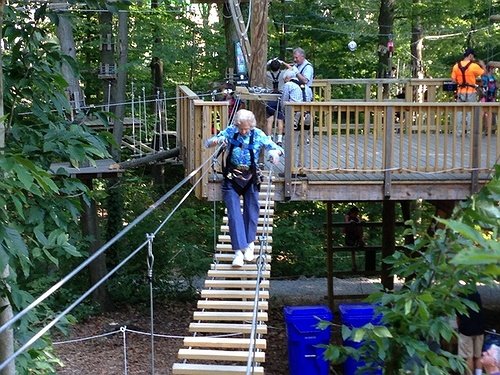 Bridgeport, CT - October 8, 2015 - Once again, a new record has been set by a climber at The Adventure Parks of Outdoor Ventures—the popular zip line and ropes courses currently operating in six States. This past September 23 Barbara (“Bebe”) Stetson, age 95, beat her own record set last year as the oldest climber to-date at any of the company’s eight Adventure Park locations.

In fact, this year, Ms. Stetson selected a more challenging aerial trail at The Adventure Park at The Discovery Museum, located in Bridgeport, Connecticut, where she climbed last year. So she added both another year and a challenge level onto her record, completing the “Sunshine” trail.

This year she climbed along with Adventure Park president and designer of the park, Bahman Azarm. “I was there to keep her company and assist if needed, but Bebe did it all on her own,” said Azarm, “She was impressive as ever!”

A photographer, Anthony Wellman, also climbed along with the duo to record Ms. Stetson’s progress along the way. “She was moving so fast that I wasn’t able to keep up with her at times, while managing my own climb, and some of the photos are blurs,” said Wellman, “Bebe was moving pretty fast!”

“I want to climb this as quickly as I can,” said Ms. Stetson during her time in the trees.

The aerial trail Ms. Stetson climbed ranges up to about 15 feet high, includes two zip lines and numerous challenge bridges between tree platforms along the way, including a pair of barrels to crawl through, a suspended cargo net, wobbly logs, a series of rope loop swings and more.

While Barbara Stetson’s experience is a record-setter, it is not uncommon for active seniors in good health to climb at The Adventure Parks. All park locations include a selection of color-coded trails ranging from beginner to intermediate to advanced. So there are suitable challenges to be found for different climbing abilities. In addition, all The Adventure Parks include beautiful trails through the park with picnic tables and benches for non-climbers to enjoy as well at no charge.

Typically pursued by kids, teens and younger or middle-aged adults, The Adventure Parks are self-guided aerial forest parks constructed by Outdoor Ventures in forests and feature platforms at different heights in the trees, connected by zip lines and challenge bridges of different kinds. Each bridge is an “element” and a series of elements forms an “aerial trail.” After donning a harness and participating in a safety briefing climbers select aerial trails based on their experience and tastes. Climbers are secured to a safety cable throughout their time in the trees.

Ms. Stetson was climbing as a participant in a fund-raiser for the Outreach programs of Trinity Church in Southport, Connecticut. Her recent treetop adventure is in keeping with Mrs. Stetson’s other activities. She has excelled at athletics all her life, winning the 1938 Ladies Singles Tennis Championship at the Maidstone Country Club in East Hampton, Long Island. At the age of 85 she rappelled down a 125-foot wall in Africa. She plays golf, tennis and swims regularly, rides a bicycle, exercises at the gym, lifts weights, plays bridge, hosts dinner parties and includes volunteer activities in her schedule.