Bay Park plant will remove an additional 5,000 pounds of nitrogen per day. 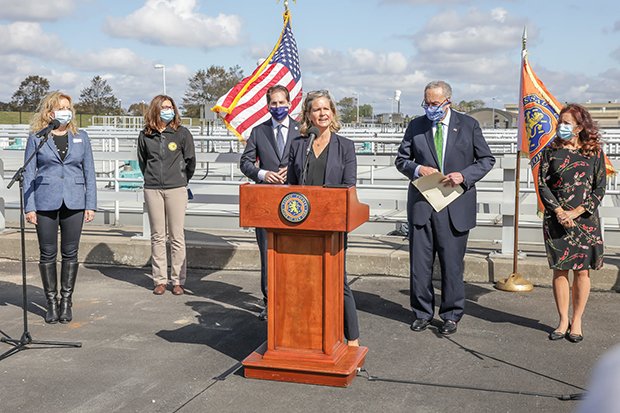 With the completion of a $19.6 million Biological Nutrient Removal system at Nassau County’s Bay Park Wastewater Treatment Plant, officials say that 5,000 pounds of nitrogen per day is being prevented from reaching the waters of the South Shore through Reynolds Channel.

The upgraded plant will help to improve water quality for fishing, swimming and other recreational activities, and offers greater protection for thousands of homeowners along the South Shore who rely on salt marshes in the Western Bays to act as storm surge barriers and mitigate flooding, according to a statement released by New York State.

The plant currently treats 50 million gallons per day of wastewater on average from more than half a million Nassau County residents.

"The upgrade to the Bay Park plant will help prevent nitrogen pollution from degrading marsh islands, killing wildlife and damaging the delicate ecosystem that is vital to Long Island's resiliency and ecological future," Governor Andrew Cuomo said in the statement.

The money for the plant came from a FEMA Public Assistance fund administered by the New York State Division of Homeland Security and Emergency Services.

“Excessive nitrogen levels have contributed to the collapse and erosion of marshes on the South Shore, which act as a barrier to storm surges from reaching land,” said Nassau County Executive Laura Curran in a Facebook post. “Bay Park’s new plant is now removing an additional 5,000 pounds per day from being discharged into Reynolds Channel.”

Curran tied the preservation of the environment directly to the lives of those who live on or near the South Shore bays.

The work represents one of the most significant environmental upgrades to the plant since it began operating in 1949.