Wealthy businessman and member of the Vanderbilt family died aboard the RMS Lusitania. 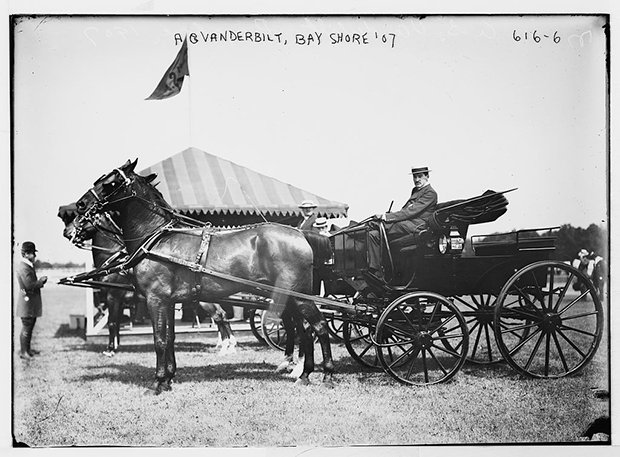 Alfred Gwynne Vanderbilt who, according to an obituary in the New York Times from 1915, inherited the bulk of the estate left by his father, Cornelius Vanderbilt, that was said to have been valued from $70,000,000 to $100,000,000. Vanderbilt died on RMS Lusitania when it was sunk on May 7, 1915 by a German U-boat.

The photo from 1907 depicts Vanderbilt in Bay Shore posed on a horse and buggy with a tent in the background. It is not clear exactly where this picture was taken. The New York Times article mentions that Vanderbilt was one of the most prominent horsemen in America at the time, winning many blue ribbons, so the photo might have been taken during a related event.

An earlier New York Times article does report of Vanderbilt attending the Bay Shore Horse Show where a dog fight broke out. The fight was between a Dalmatian owned by Vanderbilt and a bulldog owned by one of the men connected with the stable of one of the exhibitors at Oakwood Driving Park in Bay Shore.