Governor Andrew M. Cuomo today announced that work is set to begin on a $13.9 million project to resurface 16.2 miles of State Routes 106, 231 and 25A in the towns of North Hempstead, Oyster ... 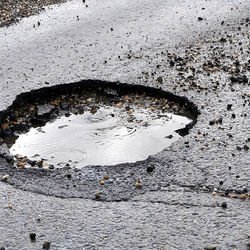 Long Island, NY - October 7, 2015 - Governor Andrew M. Cuomo today announced that work is set to begin on a $13.9 million project to resurface 16.2 miles of State Routes 106, 231 and 25A in the towns of North Hempstead, Oyster Bay, Smithtown, Riverhead and Babylon. The work is part of $75 million in paving projects that were accelerated to repair widespread damage caused by deep frost last winter.

“With another winter around the corner, it is critically important that our roadways are in the best possible shape and able to withstand whatever Mother Nature has in store,” Governor Cuomo said. “With these projects, we are strengthening Long Island’s vital transportation network and making our roadways safer for all motorists.”

The following sections of roadways will be repaved:

New York State Department of Transportation Commissioner Matthew J. Driscoll said, “Winter weather – snow, ice, freezing rain and deep frosts – can create havoc on our roads and it is important to do this resurfacing work before the cold weather returns. In keeping with Governor Cuomo’s Drivers First initiative we are minimizing the impact this construction will have on the community by performing much of the work during nighttime hours.”

The project includes removing the top layer of pavement and replacing it with new asphalt. Traffic signal loops will be replaced and fresh pavement markings, including bike lane striping and more visible pedestrian crosswalks, will be installed. The project also includes cleaning and repairing drainage structures to improve roadway runoff.

To minimize the impact of construction on motorists, pedestrians, residents and businesses, the majority of the work will be performed in stages on shorter sections of the roadways during off-peak, night time hours between 10 p.m. and 6 a.m. Monday through Friday.

While resurfacing work will take place at night, some tasks, such as cleaning catch basins will be performed during off-peak, day time hours between 10 a.m. and 3 p.m. Where possible, traffic will be shifted to accommodate the repaving work and one travel lane in each direction will remain open. Where the roadway is too narrow to accommodate two lanes, an alternating one way traffic pattern will be utilized. Intermittent brief closures of all lanes may also be utilized to accommodate positioning of construction equipment.

Senate Majority Leader John Flanagan said, “These important paving projects will help make it more convenient and safer for our residents to travel throughout our region while helping to rehabilitate our roadways for the upcoming winter. By utilizing state funding to prepare our roads for the cold weather, these projects will benefit drivers now, over the next couple of months and into the springtime. These improvements will make travel more enjoyable for our residents and visitors alike.”

Senator Carl L. Marcellino said, “Coming off a particularly harsh winter and with a new winter quickly approaching it is imperative that we get the roads repaved so that we can drive safely. It is also imperative that these projects do not place unnecessary difficulty on commuters, this project reflects both needs, to get our roads repaved and to ensure the least inconvenience to motorists.”

Senator Jack M. Martins said, “Freezing temperatures and winter weather can cause so many potholes, craters, and cracks that normal roadways begin to resemble the lunar surface. Undertaking this important improvement project will make our roads safer, stronger, and better able to withstand the harsh winter weather.”

Assemblyman Anthony Palumbo said, “I am very pleased to see these road projects being performed in my district. We have always emphasized these projects and the constant effort to maintain them for the safety of our residents. This project is especially helpful in light of the severe winter we endured last year and gives the local municipalities a nice head start in preparation of this winter.”

Assemblyman Joseph S. Saladino said, “I’m very pleased that these important projects will soon begin. Capital improvements to our roadways increase safety to our roads, bring jobs and help the turnaround of long Island’s economy. My colleagues and I have continuously worked to keep these projects on the forefront and we are pleased to work with Governor Cuomo to see them come to fruition. When we pushed to get the Sunrise Highway service roads repaved, the job got done. Now these projects on roads like Route 231 and Route 106 are essential to keeping up with our infrastructure. This is what serves the need of Long Island’s residents.”

Assemblyman Chad Lupinacci said, “I am pleased to learn that Governor Cuomo has proposed a project which will grant $13.9 million for the repaving of Nassau and Suffolk counties. For too long, Long Island’s state roadways have been neglected and this is a great first step to repair our state highway infrastructure.”

Assemblyman Charles Lavine said, “Governor Cuomo is to be commended for fighting to improve the quality of our roads, thereby enhancing the safety of all Long Islanders. While this sorely needed work is being completed, we will all have to be patient and exercise caution when travelling through work zones. The highly significant project that the Governor has ordered will restore our roads and strengthen our communities for years to come.”

Assemblyman Michael Montesano said, “I am thrilled that the state Department of Transportation has recognized the desperate need for repairs of the crumbling roads within our communities, especially as we near potentially harsh and damaging winter weather. In order to increase safety for Long Island’s daily commuters and visitors, it is crucial we make all improvements necessary to restore these highly trafficked roads.”

Nassau County Executive Edward P. Mangano said, “I thank Governor Cuomo for his commitment to restoring our State roadways prior to winter. These resurfacing projects will ensure our roads are safer for motorists.”

Babylon Town Supervisor Richard Schaffer said, “With harsh winter weather right around the corner, it’s imperative that repairs to our roadways are made now before their conditions worsen. I thank Governor Cuomo for seeing that Route 231, a major section of roadway in our Town, is given the care that it needs.”

Riverhead Town Supervisor Sean M. Walter said, “I am sure our residents and visitors are happy to see that the New York State Department of Transportation has begun work on Route 25A in Wading River. These roads are in serious disrepair due to last year’s harsh winter and I applaud Governor Cuomo for making this investment in our Town.”

North Hempstead Town Supervisor Judi Bosworth said, “Making sure that roads in our Town are consistently resurfaced is of vital importance to maintaining safe driving conditions for motorists. I thank Governor Cuomo for dedicating the resources to pave these critical state thoroughfares in the Town before the beginning of another frigid winter.”

Oyster Bay Town Supervisor John Venditto said, “These roadway improvements are important to the safety of motorists, will be an aesthetic upgrade and will be greatly appreciated by our Town residents. Our Town has long maintained the importance of making significant investments in its infrastructure to secure long-term viability. New York State’s investment in our roadways only enhances the ongoing efforts to improve the quality of life for our Town residents.”

The construction contractor for the project is Drivers First, Nassau County. Work is scheduled to be completed by the end of 2016.

Governor Cuomo’s “Drivers First” initiative, implemented in 2012, prioritizes the convenience of motorist and ensures that disruptions are as minimal as possible to drivers at highway and bridge projects across the state.

Motorists are reminded that fines are doubled for speeding in a work zone. In accordance with the Work Zone Safety Act of 2005, convictions of two or more speeding violations in a work zone could result in the suspension of an individual’s driver’s license.