New York did not have many games to watch over the weekend, and the ones that did take place did not end well. 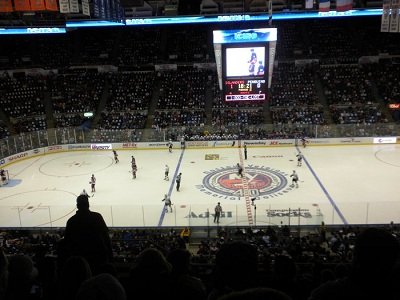 After an overtime win to beat the Devils in Friday’s start to the season, the Islanders came home to host the Blue Jackets on Saturday. The game went scoreless through nearly half of regulation, but Lubomir Visnovsky broke the game open with a shot on a power-play just over eight minutes into the second period. Matt Moulson put New York up 2-0 with a goal of his own six minutes later.

Columbus began to battle back in the third, scoring on a power-play before the eight minute mark. Four minutes later, the Blue Jackets scored goal their second to tie the game 2-2. Neither team could score again in the third, or in the ensuing overtime period.

The Blue Jackets took an 0-1 lead in the second round of the shootout; Moulson kept New York alive with a successful shot afterwards, but he was the only Islander to score. Columbus took the shootout 2-1 in four rounds, handing New York an overtime loss. Nabokov blocked 27 of 29 shots before the OT finale.

The Islanders will host the Coyotes next at 7:00 PM tomorrow.

The Giants got off to a strong start against their division rivals yesterday. After their defence put a quick end to Philadelphia’s opening drive, Eli Manning connected with Hakeem Nicks on a 49 yard pass, setting up David Wilson for his first rushing touchdown of the year. Big Blue did not score again in the first quarter, but the team did hold the Eagles to just one field goal.

Philly brought the game within 1 on a field goal early in the second quarter, then tacked on a touchdown on their ensuing drive to go up 13-7. They scored again in their third and fourth successive drives, going ahead 19-7 on the two FGs, and held New York scoreless through the rest of the quarter. On the first snap of their last drive, however, Jason Pierre-Paul injured Michael Vick’s hamstring on a tackle which would take the explosive quarterback out of the game.

New York went three-and-out in the opening drive of the second half, but Eli led his team 87 yards down the field the next time he got the ball, ending in a 26 yard TD pass to Rueben Randle which cut the deficit down to 19-14. The G-Men had a much shorter field to work through on their next possession, and after a pass interference call advanced the ball into the red zone, Manning again hooked up with Randle to give their team a 21-19 lead. Philadelphia pulled ahead again on a field goal before the quarter was over, but the Giants showed greater signs of life than they had in the past several games.

Unfortunately, the whole game began to unravel in the fourth quarter. An Eli interception set the Eagles up with prime field position, which Nick Foles took quick advantage of by throwing a 25 yard TD to Brent Celek on the first and only play of the drive. Facing another 3rd and long, Manning through his second pick in as many drives on the next possession, setting the Eagles up with a short field again. Foles threw his second TD pass of the afternoon, and the Eagles went ahead 36-21. Manning threw another interception on the next drive, and the Giants were unable to score in the fourth quarter, ultimately falling to the Eagles.

Eli went 24/52 for 334 yards, 2 touchdowns, and 3 interceptions on the day. Nicks led the team in receiving yards, catching for 142 yards on 9 receptions; Randle followed with 96 on 6 catches, including the two TDs. Brandon Jacobs led the team in rushing after David Wilson left with an injury early on, but he only produced 37 yards on 11 carries; he also fumbled in the second quarter.

With that loss, the Giants fall to 0-5. It is their worst start to a season since 1987’s strike-interrupted year, and their worst since 1979 discounting those unusual circumstances. No team in the history of the NFL has ever made the playoffs after starting 0-5, however, the Giants still remain just two games behind the pace in the NFC East after the Cowboys lost to the Broncos last night.

The Giants will play their next game in Chicago at 8:25 PM on Thursday.