Dixie, a dog rescued from the Thailand dog meat trade, found a champion of her cause in the Kent Animal Shelter and has now found a loving home. 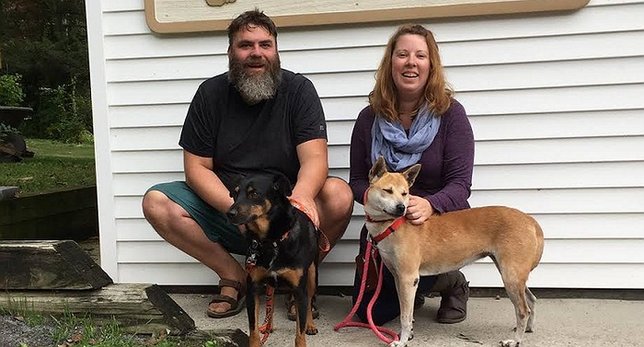 Calverton, NY - October 6, 2016 - Dixie, a dog rescued from the Thailand dog meat trade, found a champion of her cause in the Kent Animal Shelter and has now found a loving home.

Jessica Weeks and Bill Gillis, a couple who brought Kent alumnus "Kimmo" to Kent Animal Shelter’s Wines & Canines Walk/Run on September 25th, met Dixie there and couldn't stop thinking about her. They came back for her and brought her home on October 2nd.

“Instead of being brutally butchered in the Asian dog meat trade, she is now safe and sound in a loving home,” said Pamela Green, Executive Director of the Kent Animal Shelter. “I hope Dixie’s story shows what's possible when we reach out a helping hand. Pets need and deserve better from us around the world. We wish Dixie, her fur-brother Kimmo, and her new family great happiness.”

When a call went out to help the SOI or “street dogs” of Thailand, Kent Animal Shelter was there to help. Dixie arrived at JFK Airport along with several other dogs from the SOI Dog Foundation. She got food, shelter, veterinary care, and lots of love until she was adopted.

Every year, tens of thousands of dogs are inhumanely transported from Thailand to neighboring countries where they are butchered by cruel and barbaric methods for the dog meat trade. The conditions under which the dogs are transported and slaughtered are inhumane and many die from suffocation long before they reach neighboring countries. In reality these are the lucky ones.

SOI Dog Foundation is a not-for- profit, legally registered charitable organization in Thailand, the United States, Australia, the UK, France, Canada and Holland that helps the homeless, neglected and abused dogs and cats of Asia, works to end the dog meat trade throughout the region, and responds to animal welfare disasters and emergencies.

The SOI Dog Foundation and the Thai government are actively working to end this appalling practice. In the meantime, these dogs are spared a horrific fate and transported to various locations where they are safe and have a chance to live a good life without the threat of torture and death.