The latest prediction models for Hurricane Matthew show it veering far away from the Northeast. 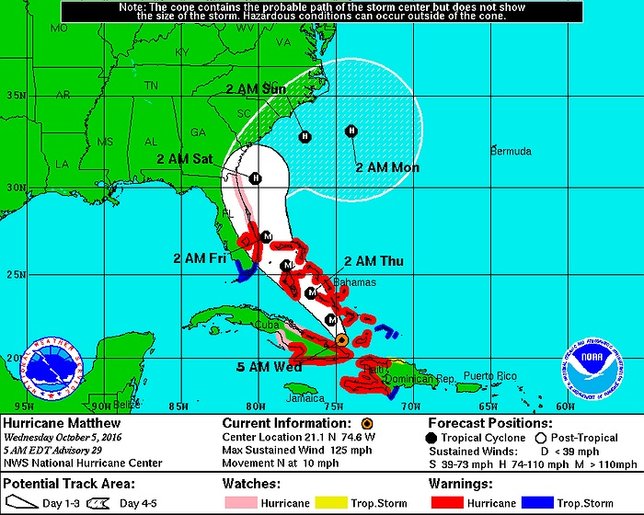 Hurricane Matthew caused massive devastation as it moved through Haiti this week, and the massive storm is now moving toward the southeastern United States. Exactly what impact it will have in the region will depend largely on where the center of the storm will be as it continues northward, but Florida, Georgia, and the Carolinas remain within its potential path.

Matthew, which has been downgraded to a Category 3 hurricane with sustained winds up to 120 mph, could reach the east coast of Florida on Thursday and is expected to creep north toward Georgia through Friday night.  The National Hurricane Center predicts that the storm will strengthen over the next two days, with a return to Category 4 strength not outside the realm of possibilities.

Those living in the Northeast can breathe a sigh of relief today as the most recent prediction models now show Matthew trending far southwest of the region, likely heading out to sea by the time it reaches as far north as Virginia. While prior models showed Long Island as a potential destination for Matthew sometime after Sunday morning, the newest predictions have its path far south of New York and likely on its way out to sea for that same time period.

The models can, of course, change as the storm continues to move north, so it is still advisable to keep an eye on the forecast and stay abreast of the latest updates for anyone living on Long Island or elsewhere in the region.

For the most up to date weather information head over to the LongIsland.com Weather Center, where you can find the latest weather forecasts, advisories and more.
Get the latest traffic & road conditions before traveling, visit the LongIsland.com Traffic Center, and check out the live traffic feeds on our Traffic Cam Page and know what traffic conditions look like before hitting the road.
[Source: NWS National Hurricane Center]