In Rally Outside Supreme Court, Suozzi Calls For “End of Partisan Gerrymandering in America.” 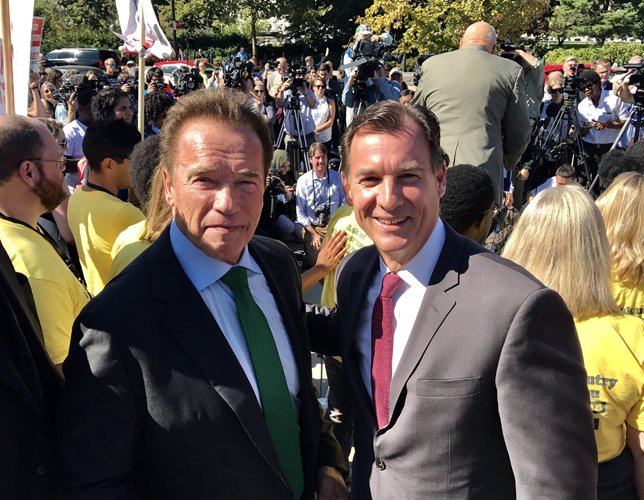 Long Island, NY - October 4, 2017 - Today, Congressman Tom Suozzi (D – Long Island, Queens) joined former Republican Governor of California Arnold Schwarzenegger and fellow Members of Congress at the U.S. Supreme Court for a rally in support of ending gerrymandering across the country. Gerrymandering is the controversial manner by which politicians draw up districts to give their political party a distinct advantage.
Congressman Suozzi’s full speech on the steps of the Supreme Court can be viewed here.
“Right now, over 400 of the 435 seats in the House of Representatives are considered ‘safe’ seats. Because of gerrymandering, if you’re a Republican, you try to please the people on the far right. If you’re a Democrat, you try to please people on the far left. If you’re in the middle, you’re going to get squashed like a bug, and the ones who lose the most are the people.
“That’s the problem in our country right now. Together we can make a difference, but we need the Supreme Court to do what’s right and declare gerrymandering unconstitutional so power is given back to the people and not politicians,” said Congressman Suozzi.
The rally occurred during oral arguments in Gill v. Whitford, a Wisconsin gerrymandering case where plaintiffs sued to end the overtly partisan way district lines are drawn. Suozzi joined Republicans and Democrats in signing an amicus brief urging the High Court to declare gerrymandering unconstitutional.