The Over 50 Fair once again had a successful run on September 27 at the Melville Marriott. 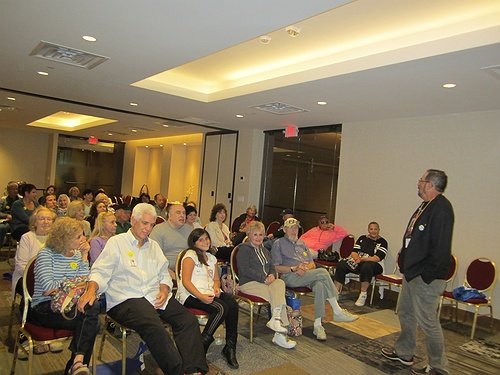 Melville, NY - October 2, 2015 - The Over 50 Fair once again had a successful run on September 27 at the Melville Marriott. The Fair had 90 exhibitors and 30 classes, some taught by local and national celebrities, covering a variety of disciplines, all designed to help those over age 50 live their lives to the fullest.

The annual event is the largest “over 50” expo on Long Island, and it once again had new features for its attendees.

“Every year, our single guests request a way to meet other singles.  This year, 7 in Heaven Singles Events facilitated this interaction in our new Singles Lounge, which had a seating area and opportunities to meet other singles,” explained East Hills resident Barbara Kaplan, the Over 50 Fair director.

In addition, there were a group psychic reading, reiki class, iPad tips, saving for retirement, travel, and health topics such as sleep apnea, cardiology, and podiatry.

This event has been building a loyal following among the Boomer Generation during the six years of its existence due to its consistent presentation of a variety of classes and products they find appealing. The free opportunities this year include valet parking, waxing, and health screenings such as video otoscope and blood pressure screenings.

Sheila Murphy of Babylon summed up the event.  “Much needed info.  Can’t wait for the next event.  I will spread the world.  Excellent event!”

The INN (Interfaith Nutrition Network), a local non-profit that helps Long Island’s needy, raised over $400 and 117 pounds of food.

Barbara’s other large event for children and their families, the All Kids Fair, will return on April 10 to the Melville Marriott.  Details can be found at www.AllKidsFair.com. The Over 50 Fair will celebrate its seventh consecutive year in 2016. Program details and opportunities for exhibiting, sponsoring, speaking, and advertising will be announced as soon as they are available.

When she is not working on large events such as the Over 50 Fair, Barbara is busy with smaller expos at Smith Haven Mall and Walt Whitman Shops, including upcoming health fairs in October.  For more information, visit www.specialtyconnections.com. Barbara Kaplan can be reached at 516-621-1446.