Behind on Your State Taxes? Owing the State Money Just Might Cost You Your Driver’s License

How to avoid losing your driving privileges due to tax debt, and what to do if you already have. 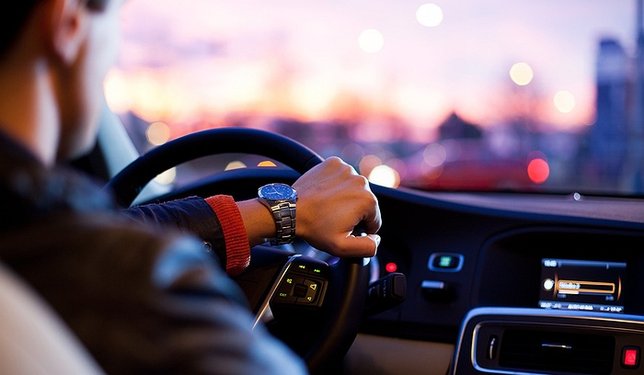 Long Island, NY - October 1, 2018 - When it comes to getting around on Long Island, one thing is for sure- if you don’t have a driver’s license, you’re going to have a difficult time. Unlike places such as Manhattan, our island is clearly set up in such a way that it makes access to a motor vehicle almost a dire necessity for day-to-day living, and if you happened to lose your driving privileges…well, it would certainly put a kink in your ability to live and work in the manner in which you’ve become accustomed.
And if – for whatever reason – you’re behind on paying your state taxes, you may very well find yourself losing those aforementioned driving privileges. For the past several years, a particular piece of legislation passed by New York State has offered a powerful incentive for residents behind in paying their taxes to get up to date with their debt; namely, the suspension of their driver’s licenses.
Since 2013, the New York State Driver’s License Suspension Program has represented a joint effort between the Department of Taxation and Finance and the Department of Motor Vehicles (DMV) to essentially revoke the driving privileges of those residents with delinquent or unpaid tax debts. Under current law, if a resident has accumulated in excess of $10,000 in unpaid state taxes, they may one day find a mailing from state officials notifying them that they will have 60 days to respond and arrange means of reimbursement, be it via monthly payments or some other method. If the 60 day deadline comes and goes without any action on the part of the resident, their personal information – name, social security number, and so on – will be sent to the DMV, and within 15 days, their driver’s license will be suspended unless the resident makes contact with state officials. 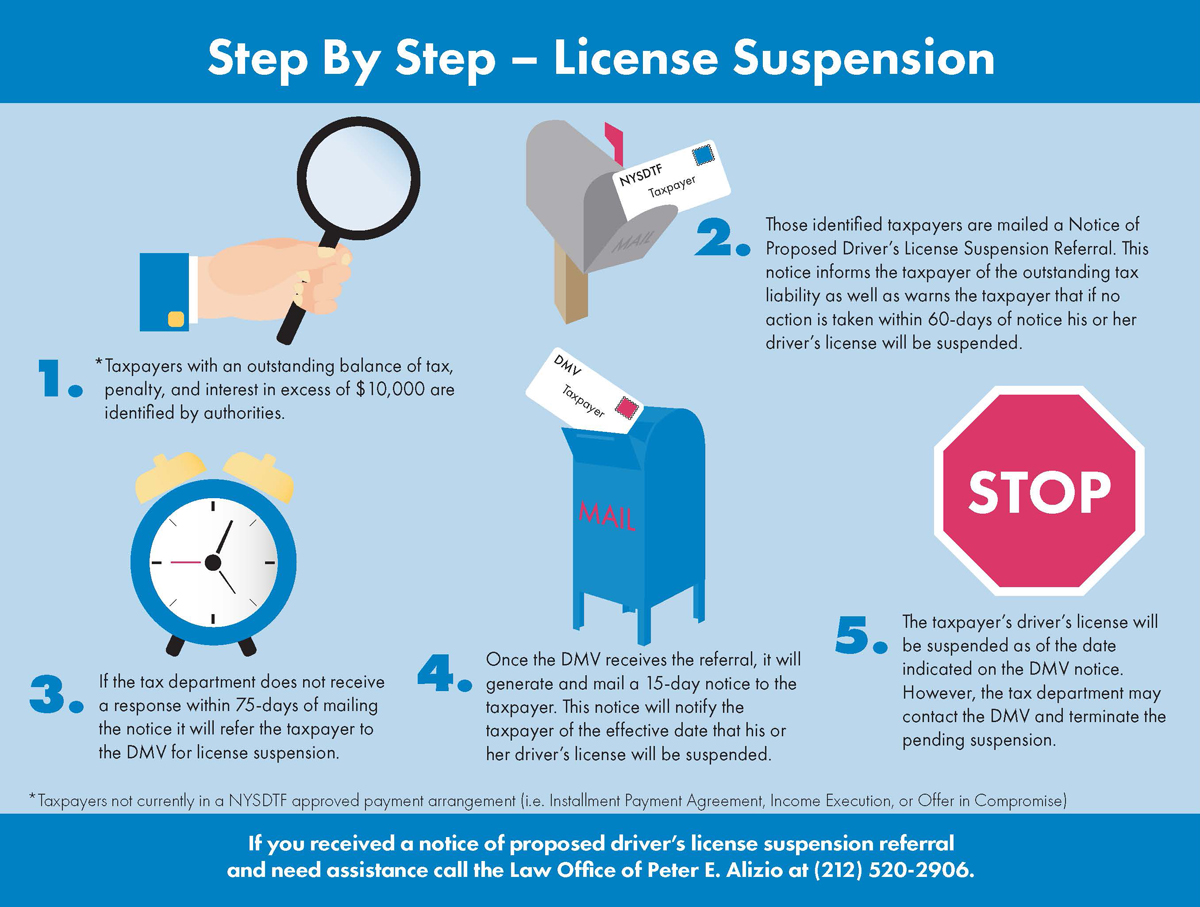 Photo Credit: Law Office of Peter E. Alizio
Yes, it could be possible to get a provisional license that will permit driving to and from work in some instances, but otherwise your access to the roadways will be summarily cut off for the duration that your tax debt exists; on a commuter-centric region such as Long Island, this can represent a crippling blow to most people in many respects.
Of course, the simplest way to avoid this malady is to just pay your taxes; however, life isn’t always a simple affair, and sometimes random and myriad complications can get in the way of even the best of intentions. In today’s harsh economic climate when good people are struggling to make ends meet, it’s easier then you might think to inadvertently let things get out of hand; and once they’ve gotten out of hand, desperation and shame may lead many to simply want to bury their heads in the sand and ignore their mailboxes as the debt notices start to pile up.
If you’ve found yourself in a situation where you’ve fallen behind in paying your taxes and are facing losing your driver’s license – or worse, have already lost it – you need the assistance of a qualified professional to get you back on track and behind the wheel once again, and the Law Office of Peter E. Alizio is the right place to start. Peter E. Alizio is a Tax Attorney and Certified Public Accountant who specializes in helping people with tax issues straighten out their problems and get back to their normal lives once again.
“The driver license suspension program is an effective tool in collecting back taxes…in fact, it’s so effective that New York Governor Andrew Cuomo recently attempted – unsuccessfully – to bring the threshold down from $10,000 to $5,000 in the state’s most recent budget,” Alizio said. “Currently, I would say about 25 percent of phone calls to my office are driver license suspension-related. And when you get a notice like that in the mail, waiting to do something about it is the worst thing you can do. You need to contact New York State within the 60 day warning period and get the services of a qualified tax attorney. There are many ways that I can set up payment plans and get you your full license back, in most cases, right away.”
From there, Alizio notes that several options are available to people with tax issues facing the loss of their driver’s license, and the sooner they address the issue, the sooner they can get back to their normal, productive lives.
To find out more, visit www.aliziolaw.com or call 212-520-2906.